Opened: c.1911. Jack Tillmany reports the first telephone directory listing for the Panama Theatre was the October 1, 1911 edition. The first city directory listing was July 1913. The location was on the south side of the street between Brazil St. and Persia St., opposite Ocean Ave. 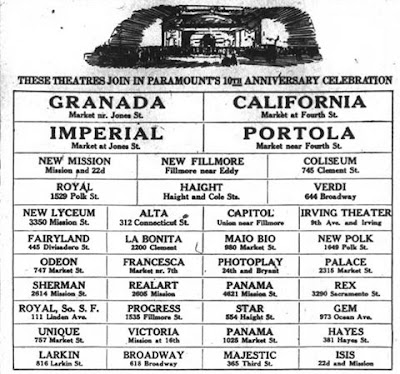 The Panama on Mission is one of two Panama Theatres listed in a March 12, 1922 Paramount ad appearing in the SF Call. Thanks to Chris Ellinger for finding the ad -- he had it as a post on the BAHT Facebook page.


Status: Demolished for the construction of the Excelsior Theatre, later renamed the Granada. An article in the August 3, 1922 Chronicle discussing the new theatre notes that two of the storefronts in the building were on the site of the Panama Theatre. Evidently there was some messing around with the numbers as the Excelsior used an address of 2631.