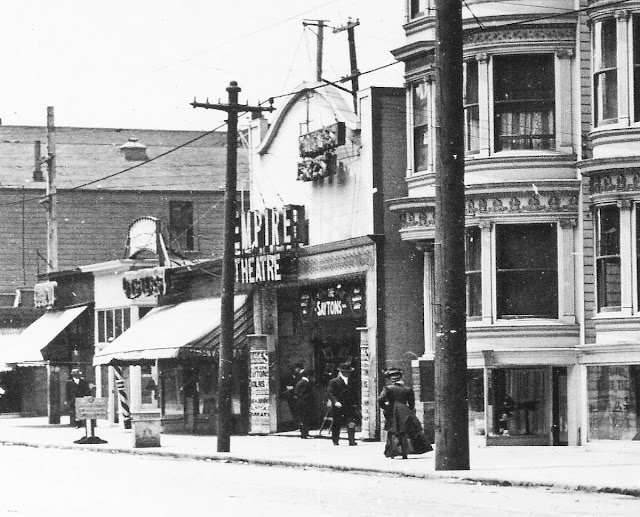 Opened: September 24, 1906 as the Empire Theatre.  The house was booked by the Western States Vaudeville circuit. The image is a detail from a June 1909 photo in the Jack Tillmany collection. The theatre was on the north side of the street between Fillmore and Steiner.

Buried in a page 4 September 25 Chronicle article about the comedy team of Kolb and Dill appearing at the Central Theatre on Market St. was this about the Empire:

"The Empire, a new theater, and one of the handsomest and most substantial of the recently built playhouses, opened its doors yesterday and entertained large audiences at every performance. The houses [sic] owned and operated by the Empire Theater circuit, a popular priced vaudeville combination, which controls similar houses in various parts of the State. William A. Weston and Ed Ackerman are associated in the management. The auditorium seats twelve hundred people.

"It will be the policy of the management to give a bill, consisting of a vaudeville olio and a short burlesque, which will be changed every week. The afternoon performance begins at 3 o'clock and the evening performances at 7:30 and 9 o'clock.  The opening bill is as follows: Avill and Grimm, black face comedians; Oliver Smith, illustrated songs; Elmer E. Lissenden, monologist; the bioscope and Jack Goldin and company in a short burlesque entitled 'The Baron From Berlin.'"

Well, OK, the Empire did get third billing in the headline as well with the words "New Theater Is Opened." Thanks to Jack Tillmany for the research. The page can be viewed on Newsbank.

Jack comments that the Empire was an L-Shaped building with a back entrance on Steiner St. for the performers' entrance and loading. On the same block as the Empire just a bit farther east was the Sutter Theatre, which opened in November 1907. The 1908 city directory lists the Empire as at Sutter and Steiner. Some of the theatre's ads listed it that way as well.

It was taken over by Alexander Pantages in 1908. Jack notes that the earliest documentation he could find for Pantages' involvement was an ad on page 7 in the October 28, 1908 Chronicle. The ad calls it the Pantages Theatre, "formerly Empire," and promised "unequaled vaudeville." 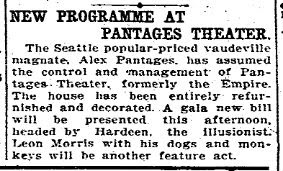 The "official announcement" of the Pantages takeover appeared in an article on page 31 in the November 1, 1906 Chronicle. The page is on Newsbank.

But Pantages evidently never changed the signage. In a November 12, 1908 Chronicle ad he's calling it the Pantages Empire Theatre. In the 1909 photo at the top of the page there's Pantages advertising on the display boards and the Empire signage is still up. Maybe Alex was saving his money for his new theatre.

Closing: Pantages was gone when he got his new Market St. theatre open on December 30, 1911. The last city directory listing for this theatre was the August 1911 edition.

Jack Tillmany comments: "In later years (ca 1916-1920), it was the home of the California Fuel Company, who used Kleiber Motor Trucks manufactured in SF on Folsom St. and then later the Edward J. Lynch Electric Company, who I was surprised to discover, manufactured the 'florescent mural paintings' which enhanced the Grandview Theatre."

Status: It's been demolished. 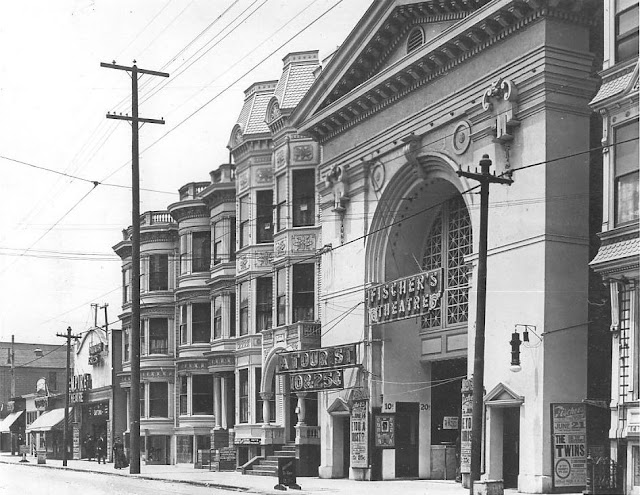 This is the full 1909 photo that the image at the top of the page was derived from. It's in the Jack Tillmany collection. We're looking west on Sutter toward Steiner St. with the Sutter/Fischer's Theatre on the right and the Empire down the block. A smaller version of the photo is on the San Francisco Public Library website.

More information: See the Cinema Tour page about the Empire.

Head to the Fillmore District album on the BAHT Facebook page for photos of many more theatres in the area.