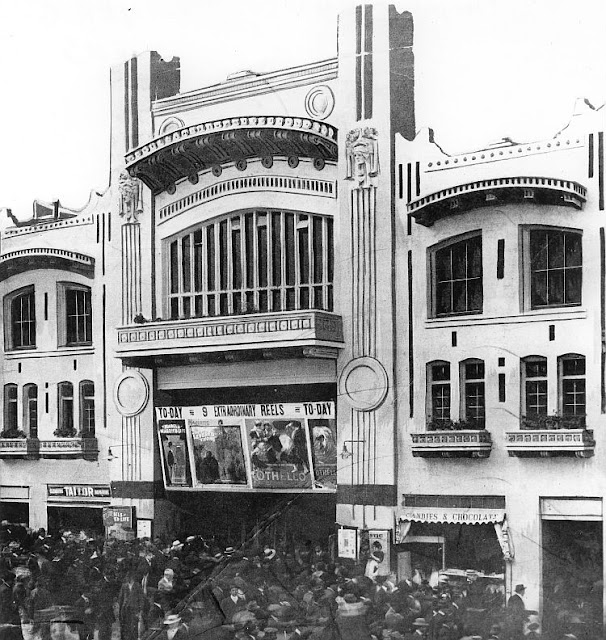 Opening: The theatre opened as the Royal Palace in 1909. The location was on the north side of the street between Columbus and Stockton. It was renamed the Royal in 1912, the Verdi in 1915. It became the World Theatre in 1954, acquiring that name when the World Theatre across the street, the former Liberty, was demolished.

The photo from the Jack Tillmany collection dates from 1914 with the theatre running a nine reel Italian production of "Othello." The poster on the left is advertising the Keystone comedy "Mabel's Married Life" with Charlie Chaplin, Mabel Normand and Mack Swain. A smaller version of the photo can be seen on the San Francisco Public Library website where they just have it labeled as "The New Theatre."

Status: The space occupied by the World has been gutted and is now part of a restaurant complex called China Live! 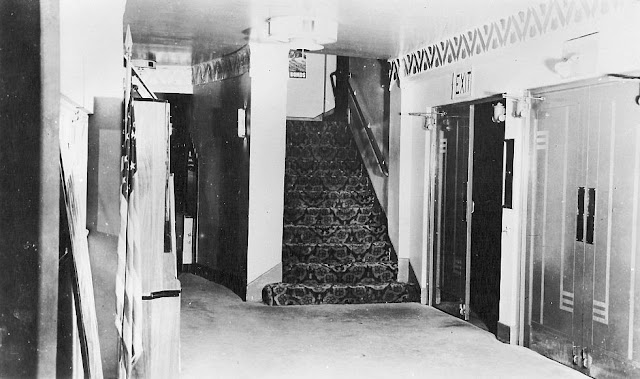 The lobby of the theatre in February 1943 when it was still called the Verdi. It's a Ted Newman photo in the collection of Jack Tillmany. He comments: "Note the absence of a snack bar in the lobby, pretty much a Post-WWII phenomenon in sites such as these."

Gary Parks adds: "The carpet pattern visible on the lobby stairs is one popular in the 30s. A notable use of it was in the 1937 redecoration of the Fox California in San Jose." 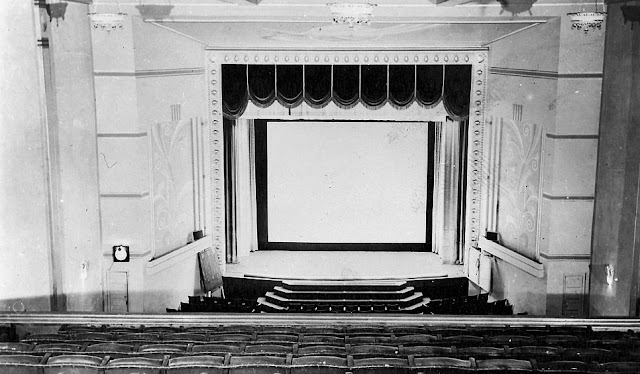 A proscenium view showing the effects of a deco remodel. It's a February 1943 photo by Ted Newman from the Jack Tillmany collection. A smaller version of the photo is on the San Francisco Public Library website.

Gary Parks comments: "It's interesting to see the juxtaposition of Hollywood Regency/Skouras style murals over the former organ chambers and on on the proscenium sounding board, and original ceiling beams and (unusually) chandeliers from the Teens!" 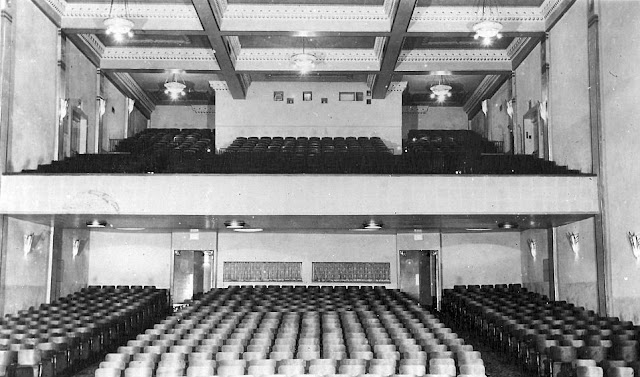 The rear of the house in February 1943. The photo by Ted Newman is from the Jack Tillmany collection. It can also be seen on the San Francisco Public Library website. 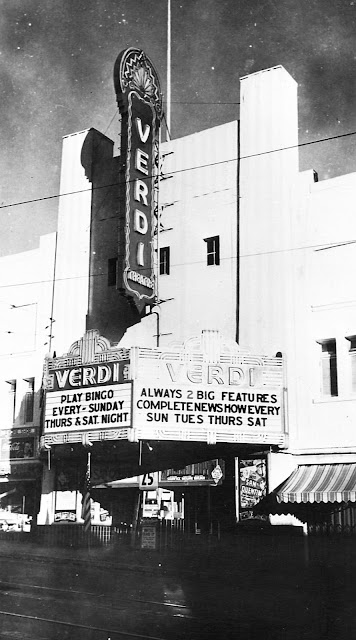 The theatre in February 1943. It's a Ted Newman photo from the Jack Tillmany collection. A small version can be seen on the San Francisco Public Library website.

Jack comments: "Note the generic WWII marquee, just as in the case of the Parkside and Royal, which were taken about the same time. Note also the 25 cents admission price and the 3 nights of Bingo. The Palace (later Pagoda Palace) was the primary North Beach neighborhood house at that time and the Verdi and Acme (later Times) were the counterparts of the Balboa and Star in the Richmond District. The pecking order was pretty well established. The films in the photo, 'San Quentin' and 'Golden Boy,' were 1937 and 1939 retreads with popular stars which provided backup cannon fodder for the Verdi's frequent four changes a week." 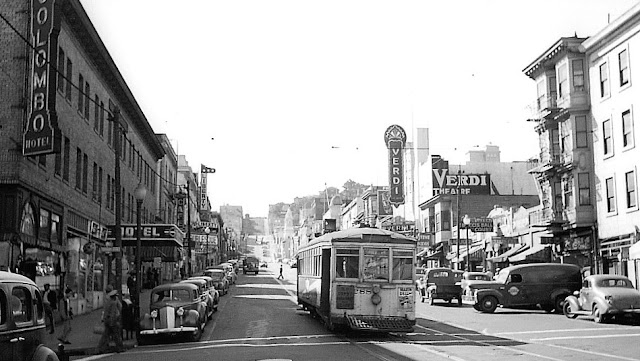 The view west on Broadway. It's a photo from the Jack Tillmany collection. He comments: "The year is 1946 and an aged Market Street Railway veteran is making one of its last trips to the Union Iron Works on Third Street on Muni's wartime #16 line. If you look very closely, on the same side of the street as the Verdi, you will see Bocce Ball Court. That's the old Broadway Theatre, (618 Broadway) which goes back to 1909."

On the left side of the street that vertical with the flag at the top is the Liberty Theatre, 649 Broadway. A Charles Cushman photo from April 1957. It's in the Charles W. Cushman Photograph Collection at Indiana University. 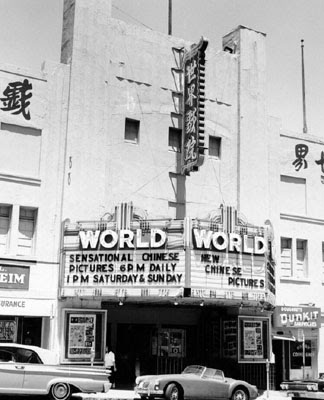 The theatre in 1964 running "Sensational Chinese Pictures." It's a photo by Alan J. Canterbury in the San Francisco Public Library collection. 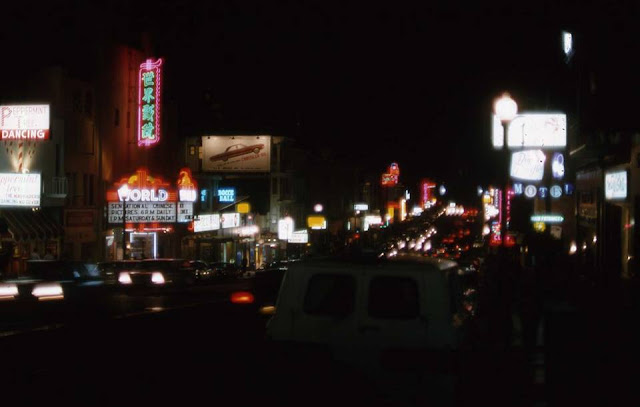 Thanks to Don Hargreaves for this 1965 view east towards Columbus. He had it on San Francisco Remembered. 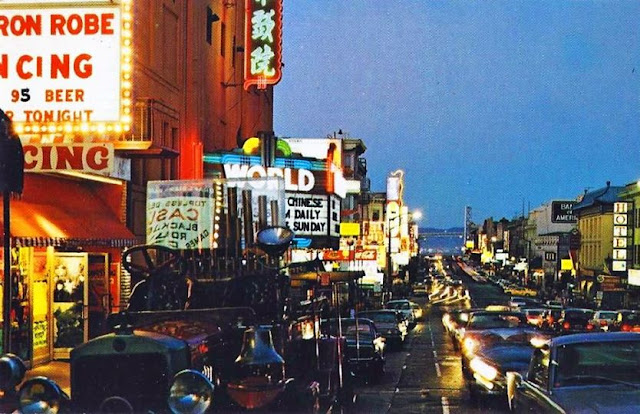 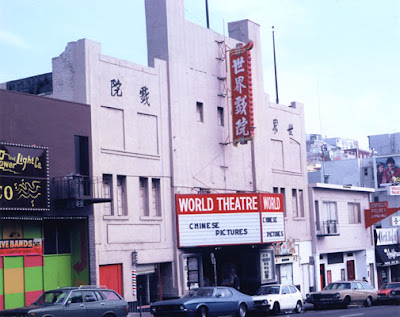 We get a cheaper new marquee in this view of the 1909 building. It was demolished in the 80s for a new 4 story structure with a smaller World Theatre in the basement. The photo is from the Jack Tillmany collection on the San Francisco Public Library website. 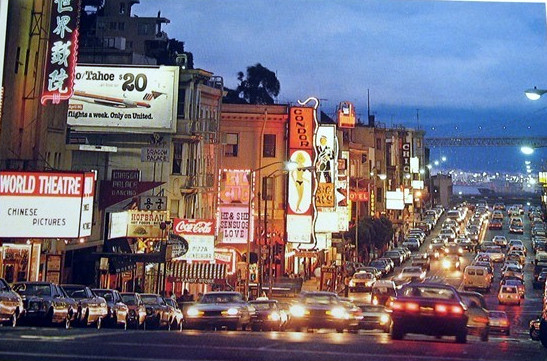 Thanks to Bill Gabel for this fine view looking east on Broadway with the theatre over on the left.  It's a c.1979 shot by Edmund Swinglehurst. It was on Cinema Treasures but seems to have vanished from that site. Another version of the photo was posted by Bob Ristelhueber on the Bay Area Historic Theatres Facebook page.

Gary Parks comments: "When the World was torn down, a pair of canvas murals were discovered on the auditorium walls behind the later walls--presumably flanking the screen. Italian in style, with nymphs amid fountains and trees, they must have dated from its days as the Verdi. They were saved, and were hanging on the walls--for sale--at Swallowtail Antiques on Polk in the late 1990s. I saw them there, but didn't have my camera. Don't know what happened to them." 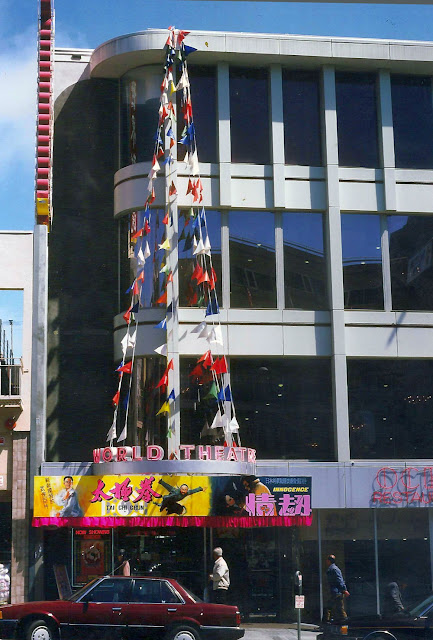 This is the building that replaced the 1909 vintage theatre. They reused the vertical from the old World (see upper left) and included a 437 seat theatre in the basement. It's a c.1985 photo by Tom Gray that's in the Jack Tillmany collection. 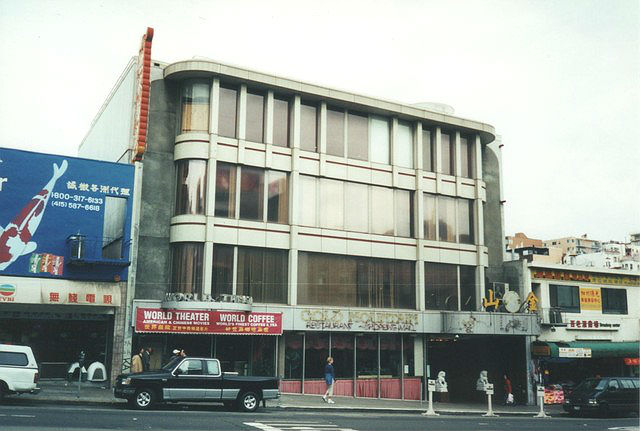 Thanks to Ken Roe on Cinema Treasures for this October 2000 photo. 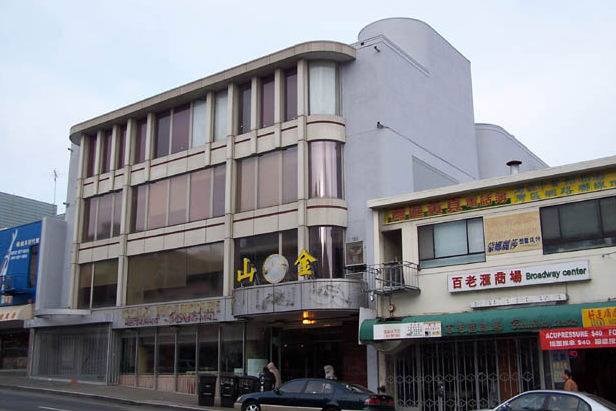 A 2005 look at the building with the theatre signage gone. It's a photo by Adam Martin on Cinema Tour. 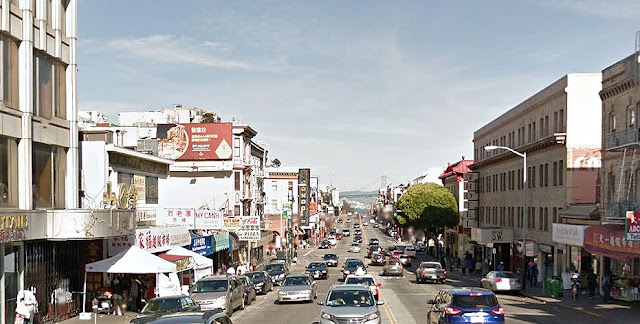 The view east on Broadway in 2013. Photo: Google Maps 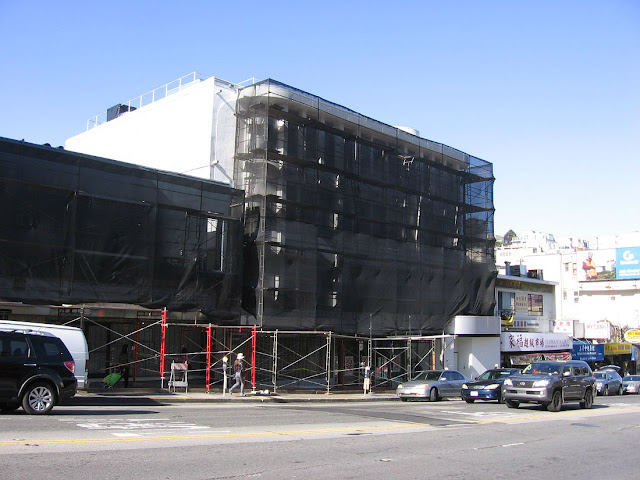 Work is underway on the building. Photo: Bill Counter - April 2015 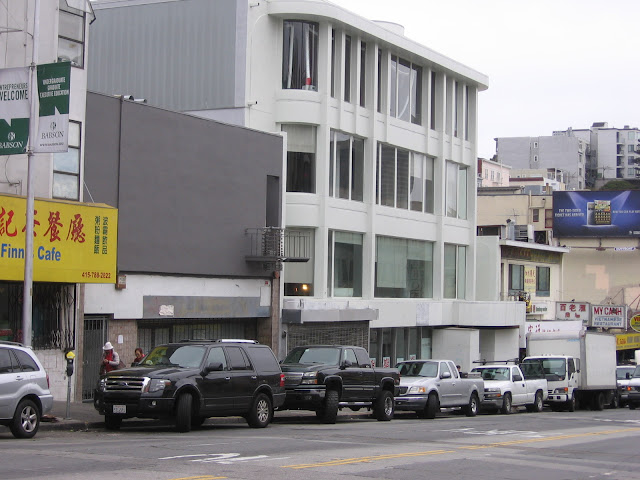 A look after exterior work was done. Photo: Bill Counter - 2015 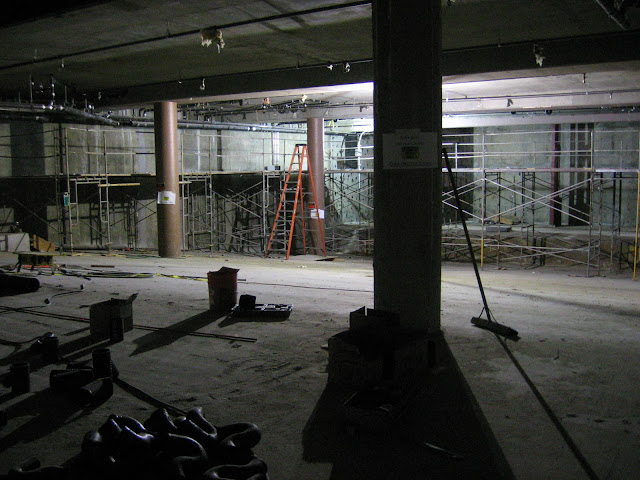 In the basement looking at what's left of the stripped-out theatre. The booth is gone. The equipment had been Simplexes with Christie lamps. About all that's left are restrooms, a sloped floor and the stage. This 80s theatre underneath the office building was the replacement for the earlier, much larger, theatre that had been on the site. A good chunk of this building is now built out for the eatery venture China Live! Photo: Bill Counter - May 2015

More Information: Cinema Treasures has a page for the original Verdi/World Theatre as well as the replacement World Theatre.  There's also a page on Cinema Tour about the theatre.

Jack Tillmany's Arcadia Publishing book "Theatres of San Francisco" can be previewed on Google Books. It's available from Amazon or your local bookseller. Jack mentions the World on page 59.

The Registry had a 2013 story "Cypress properties Group Backs the Acquistion,,," that dealt with the sale of the building. They also had a 2014 story "China Live and SFFS Take Most of Available Space..." dealing with leasing.

| back to top | San Francisco Theatres: by address and neighborhood | alphabetical list | list by architect | home |
Posted by B Counter at June 14, 2017