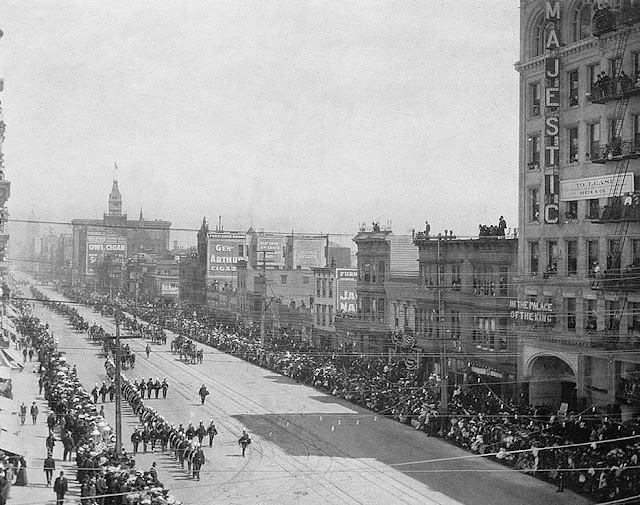 Opened: April 18, 1904. The Majestic was on the south side of the street just east of 9th St., opposite Larkin. Both the theatre and the Majestic Building were listed at the 1281 Market address in the 1905 city directory. This 1904 photo from the Glenn Koch collection appeared as a post on his Facebook page Vintage San Francisco. He comments:

"At the beginning of September, 1904 a monumental gathering was held in San Francisco of the Masonic body known as the Knights Templar. This Grand Encampment Triennial went on for the whole first week of September and filled the city with thousands of visitors. The decorations that lined lower Market Street for the event were breathtaking including the lighting of the Ferry Building tower with a giant Templar shield. The culmination of the festivities was a giant parade that stretched down Market Street to Van Ness. The photo, taken just in front of the newly opened Majestic Theater, just east of 9th Street and opposite Larkin Street, shows part of the parade from that day. Today this is solidly in the heart of Mid-Market with all its associated issues, but in the days before the quake and fire this was a flourishing stretch of the city's main thoroughfare."
The theatre was operated by Harry Bishop. In late 1905 he also began running the Central Theatre, previously operated by Belasco and Mayer. There are several stories mentioning these two parties at the top of the page about the Embassy, in 1905 still under construction. Both Bishop and the Belasco and Mayer forces were trying to get control of the new theatre.

Destroyed: April 17, 1906. Jack Tillmany comments that this was just a few hours before its 2nd birthday. 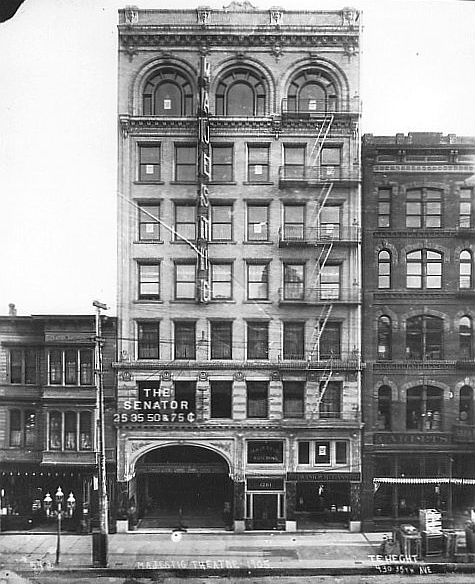 Thanks to Jack Tillmany for the 1905 photo from his collection. The show at the time was "The Senator." There's a smaller version of the photo on the San Francisco Public Library website. 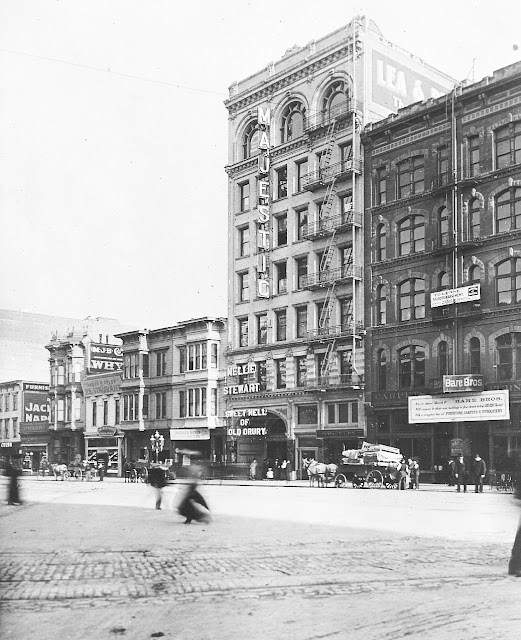 A January 1906 view looking east along Market St. The photo is from the Jack Tillmany collection. A smaller version is on the San Francisco Public Library website. Jack notes: "Nellie Stewart in 'Sweet Nell of Old Drury' was a big success; it opened 22 January 1906 and closed 18 February 1906." 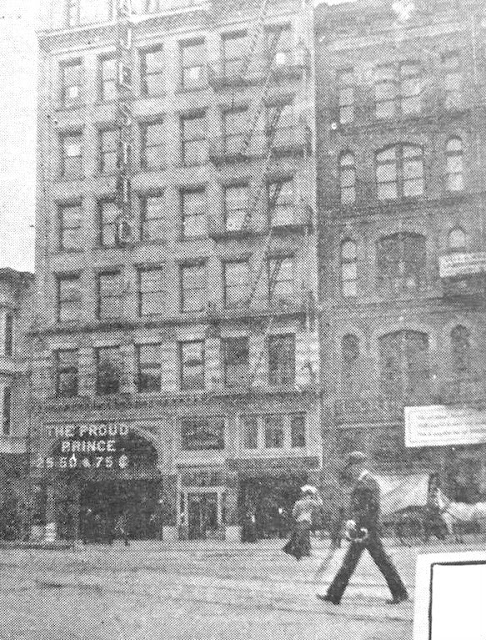 Thanks to Glenn Koch for this c.1906 photo, one that appeared in an October 1906 souvenir program in his collection for the opening of the Colonial Theatre, a house later known as the President. It was part of a portfolio honoring theatres lost in the fire and earthquake plus a few of the hasty replacements. See Glenn's post on the BAHT Facebook page for 26 more images from the program. 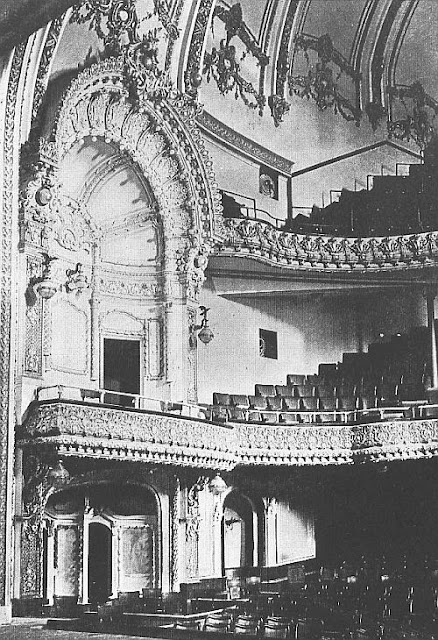 A look over toward house right by Strobel from the Jack Tillmany collection. The image can also be seen on Calisphere from the Museum of Performance and Design Performing Arts Library.

There's also a version in the San Francisco Public Library collection. On the back of theirs it says: "The interior of San Francisco's Majestic Theatre, which had opened on Market Street opposite Larkin Street in 1904, as it appeared before the great Earthquake and Fire of April 18, 1906. 'Who Goes There?' a farce by and starring Walter E. Perkins, was this house's last attraction." 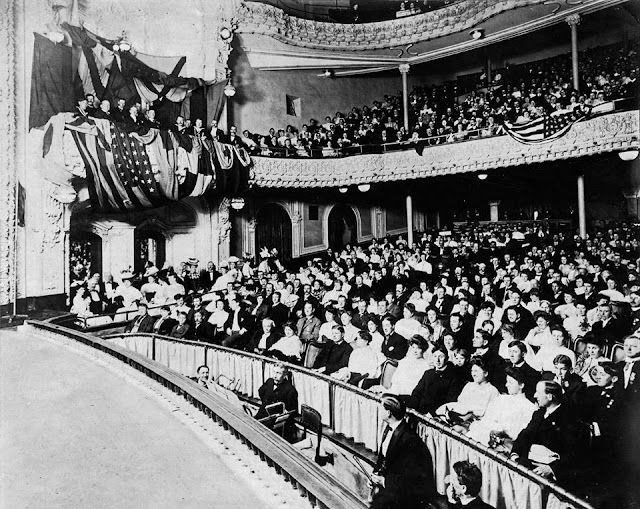 Thanks to Glenn Koch for this undated photo from his collection. A rally or celebration of some sort -- we have dignitaries, sailors, flags. Glenn shared the photo on a post on the BAHT Facebook page.


After the earthquake and fire: 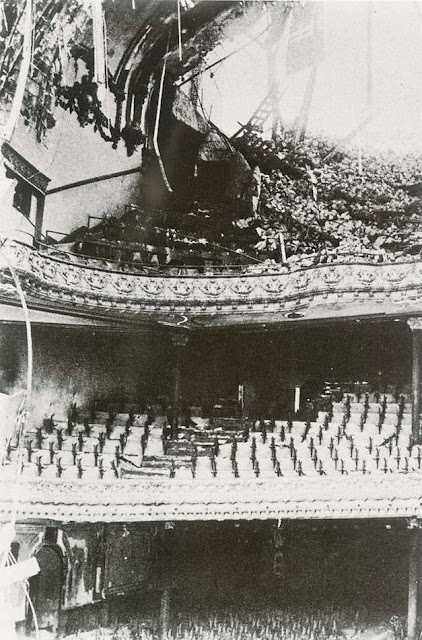 A look up from the stage after the 1906 earthquake. The photo is on Calisphere from the Museum of Performance and Design Performing Arts Library. A smaller version of this view (with slightly different cropping) appears in the San Francisco Public Library website, where they credit theirs to the UC Bancroft Library. 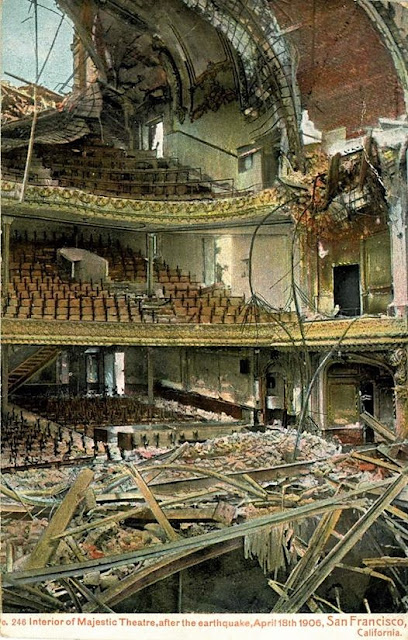 Thanks to Brooklyn-based theatre historian Cezar Del Valle for this postcard view house left. It was a post of the card on the BAHT Facebook page. Visit Cezar's Theatre Talks blog for other great material he's discovered. A non-colorized view of the image, also a bit larger, is in the California State Library collection. 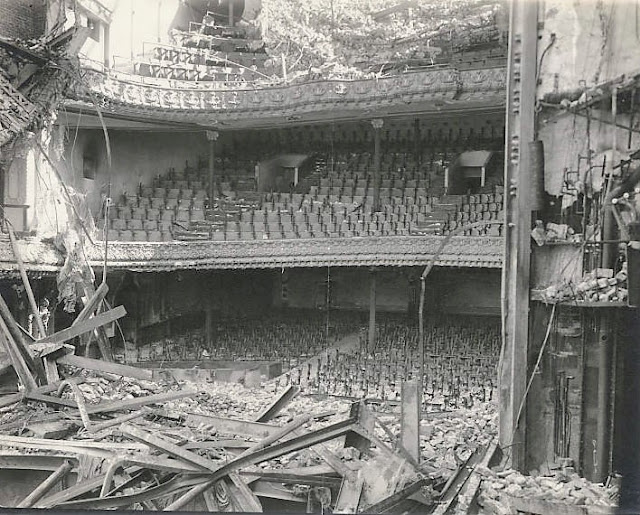 A fine May 18, 1906 backstage view of the ruined theatre by Theodore Kytka. The photo is on Calisphere from the California Historical Society. 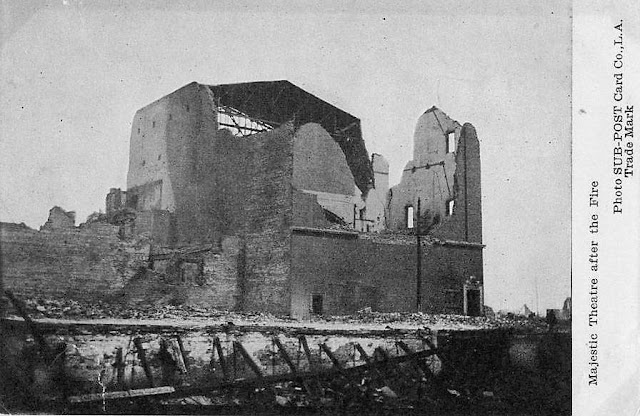 A postcard view of the shell of the theatre after the 1906 earthquake. It's on Calisphere from the Museum of Performance and Design Performing Arts Library. 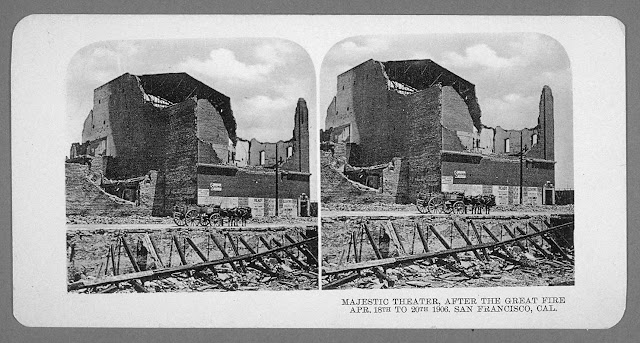 If you had a stereo card viewer handy, we could see the ruins of the Majestic in 3-D. The card is on Calisphere from the UC Berkeley Bancroft Library. 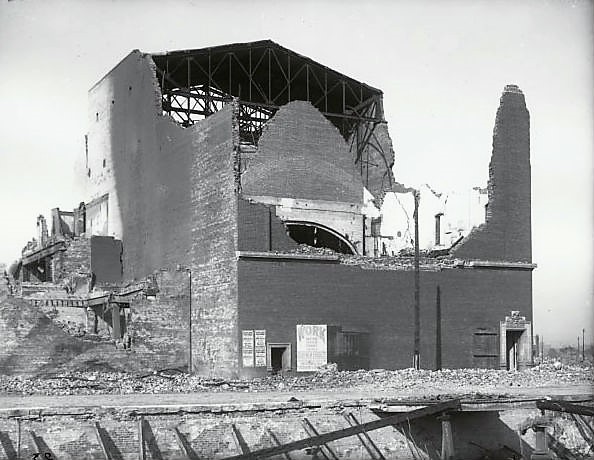 Another ruins view. We're behind the stage (looking north toward Market St.) with the stagehouse mostly gone. There's a bit of the rear of the proscenium arch visible and the structure of the auditorium beyond. It's a photo on Calisphere from the UC Bancroft Library. Looking north toward Market with the ruins of the Majestic Theatre at the left and Varney's Cyclorama at the right. It's a photo in the San Francisco Public Library collection. 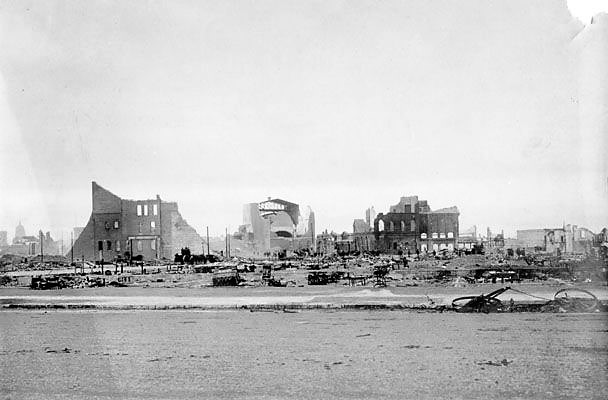 A similar view but taken from farther back. It appears to be taken a bit earlier as there's more remaining of the Cyclorama ruins on the right. It's a San Francisco Public Library photo. They say it's on Van Ness looking southeast and encompasses the site of the St. Nicholas Hotel, which was north of Market at Market and Hayes. 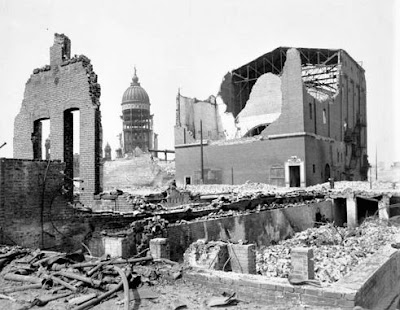 Looking through the ruined Majestic across Market toward City Hall. It's a photo in the San Francisco Public Library collection. 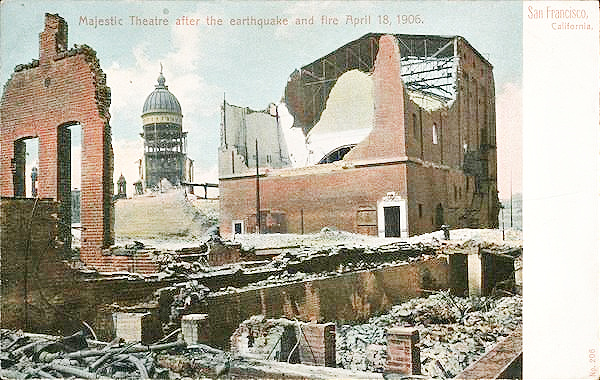 A postcard version of the photo above. Thanks to Art Siegel for spotting this on eBay. 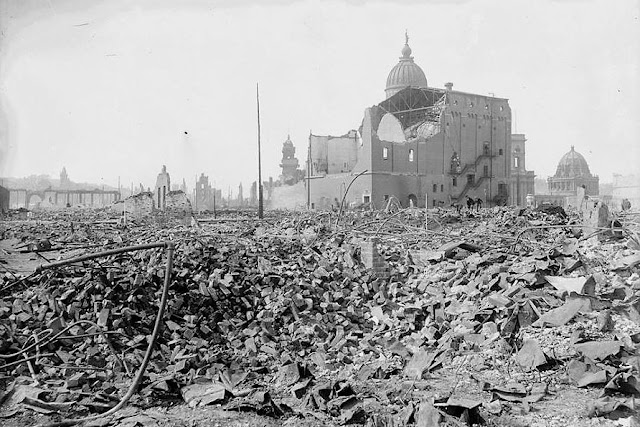 Another nice view with the ruins of City Hall in the distance. With this angle we get a better look at the fire escapes on the house left side of the auditorium. It's from the L. Tom Perry Special Collections, Harold B. Lee library, Brigham Young University. It's their item #MSS P 585.

More Information: There was also a downtown post-quake Majestic Theatre south of Market on 3rd St. The Tower Theatre in the Mission district opened as the Majestic in 1912.

There's a lovely view purporting to be a 1906 Majestic lobby shot on the blog Dos Artistas but we suspect it's actually of City Hall.