Opened: The Fairmont Playhouse opened in the Fairmont Hotel on September 14, 1933 with a presentation of "Dangerous Corner."

A September 1933 ad for the school associated with the Playhouse.

The Playhouse continued to operate until June 2, 1936 when "Hamlet" seems to have been its final production. Thanks to Jack Tillmany for the research. It's possible that the Playhouse was using the the same space as the later Nob Hill Theatre, which opened at the hotel in October 1944 with a California St. entrance.


Elizabeth Holloway at the Fairmont: 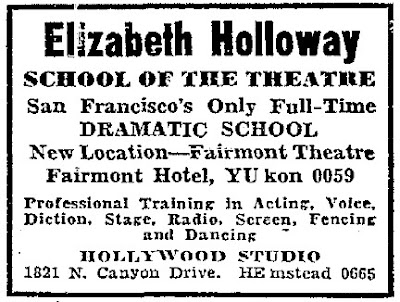 Ms. Holloway was a well known impresario in San Francisco, having presented shows beginning in the 1920s at the Community Playhouse on Sutter St., a venue later known as the Marines Memorial Theatre. This August 14, 1938 ad announced her move to to what she was calling the Fairmont Theatre. 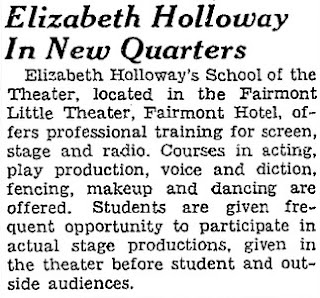 A September 4, 1938 article about Holloway's school calling her space the Fairmont Little Theatre.

A July 14, 1946 Examiner article about the school. You had to learn to cry to get your red star. "Anybody can cry," said Holloway. 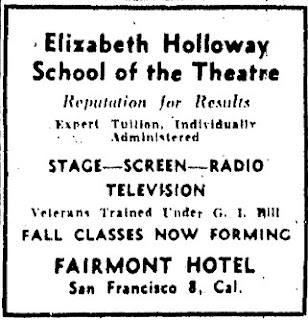 An October 3, 1946 ad for the school. Thanks to Jack Tillmany for locating these ads and articles.

It's unknown what room or rooms at the hotel Ms. Holloway was using at various times. Until 1944 it could have been the room that became the Nob Hill Theatre. If that were the case, she got moved to another space when the film house opened. The 1946 Examiner article notes that Holloway's location at that time was across the hall from the Papagayo Room.

Later in 1946 Holloway moved her operation back to the Marines Memorial Theatre.

More information:  Thanks to Jack Tillmany for the research. His Arcadia Publishing book "Theatres of San Francisco" can be previewed on Google Books. It's available from Amazon or your local bookseller.