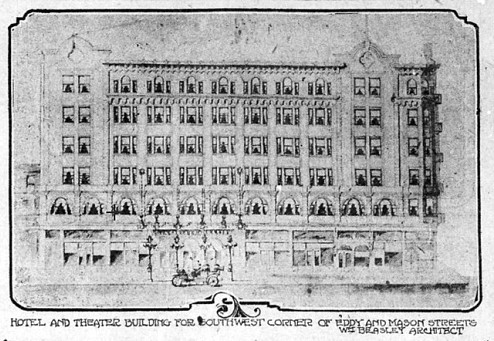 Opened: Well, it never did. This announcement of the "Hotel and Theater Building" appeared in the June 17, 1911 issue of the San Francisco Call. Thanks to Mark Ellinger for locating the item via the California Digital Newspaper Collection. He includes it with his Up From the Deep article about the building.

Architect: William Beasley was the architect for version #1. For reasons unknown just months later Earl B. Scott did a different design for the same developers that was actually built. Well, part of it got built anyway. K. McDonald came along in 1922 as the architect when the project resumed construction.

Seating: It was announced as a 1,600 seat legit theatre.

The location on the southwest corner of Mason and Eddy was the site of the Tivoli Opera House that had been lost in 1906. The replacement Tivoli Theatre, just around the corner at 70 Eddy St., would open in 1913. 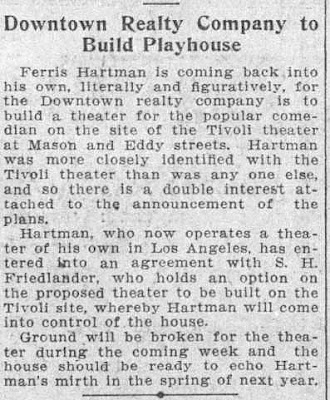 Another 1911 item in the Call noting that popular comedian Ferris Hartman would be operating the theatre. Thanks to Michael Thomas Angelo for finding this article as well as other items for a BAHT Facebook page post about the building. Angelo notes that Hartman died in an Oakland flop house in September 1931. 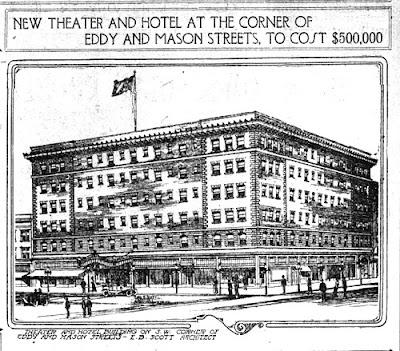 Design #2 with a different architect. This item appeared in the September 2, 1911 issue of the San Francisco Call. Beasley is no longer with the project. It's now a design by Earl B. Scott. 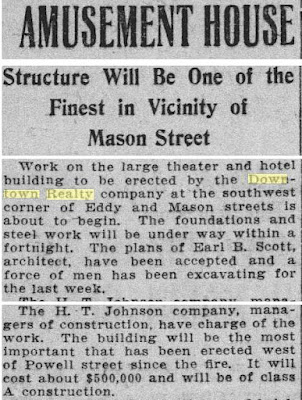 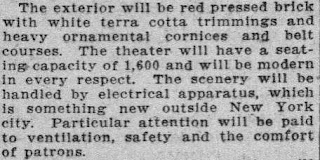 The story that appeared in the September 2, 1911 issue of the Call noting that work would begin "within a fortnight." 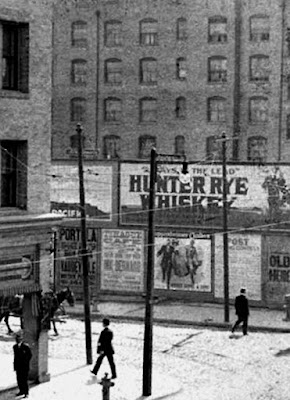 The Athens Lodgings (later the Bristol Hotel) is in the foreground as we look across to the construction fence around the lot where the new hotel, eventually to be called the Ambassador, would rise. Thanks to Mark Ellinger for locating the c.1911 photo in the collection of the UC Berkeley Bancroft Library. 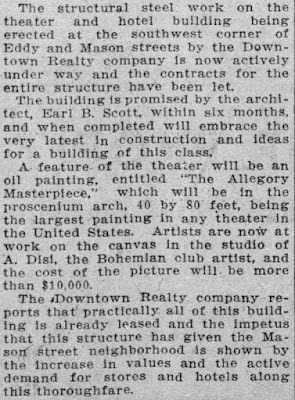 The steel was going up on the theatre and hotel and things were far enough along that an artist was working on the "massive painting which will be in the proscenium arch, 40 by 80 feet...", according to this February 10, 1912 story in the Call.

Legal troubles stopped the project in December 1912 with building unfinished. It sat 10 years. It was a dispute between the developer, Downtown Realty, and the heirs of the person that had owned the land. It seems the developer hadn't been paying the rent and thought those unpaid amounts could eventually be paid as partial payment on an option they had to buy the property. They did not prevail. 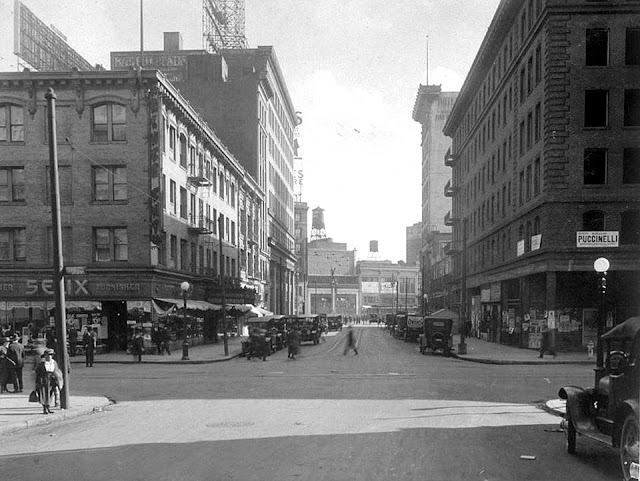 The building is on the right, sitting unfinished in 1920 with no work having been done on it since 1912. We're looking south on Mason toward Market St. It's a photo from the Jesse Brown Cook scrapbooks appearing on Calisphere from the UC Berkeley Bancroft Library. Gary Parks comments that the building we see on the right down on Market is the St. Francis Theatre.

The hotel portion of the project was completed in 1922. It's unknown how far along the theatre was when work stopped in 1912. When the building opened in 1922 the hotel was called the Ambassador -- and the space that was intended as the theatre had become a parking garage.

An early postcard of the Ambassador. Thanks to Michael Thomas Angelo for finding it. 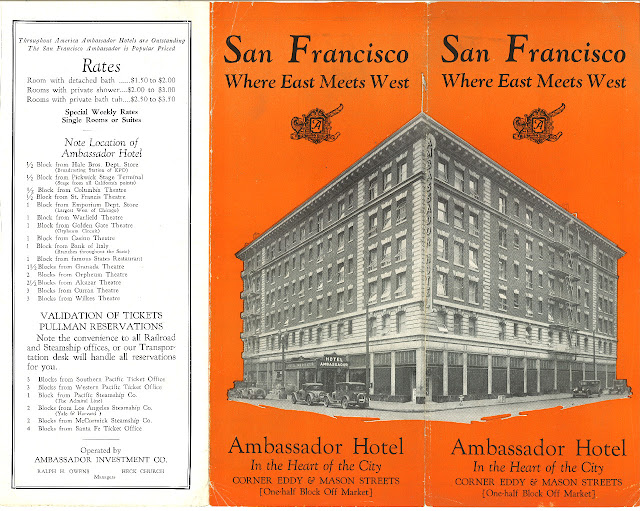 A 1930 brochure for the hotel appearing on Wikimedia Commons. 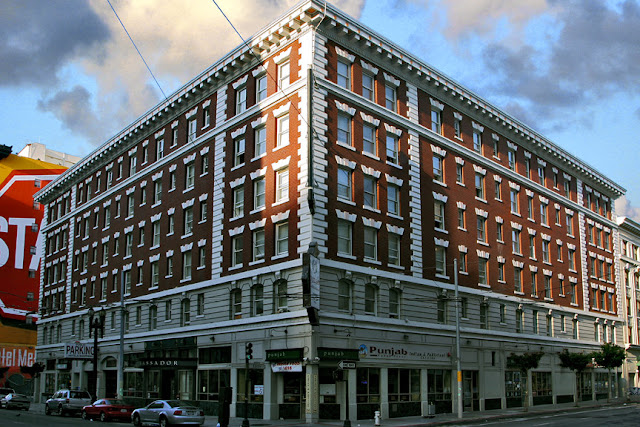 A 2006 view of the building by Mark Ellinger that appears with his Up From the Deep article about the building. He calls this his "postcard view." 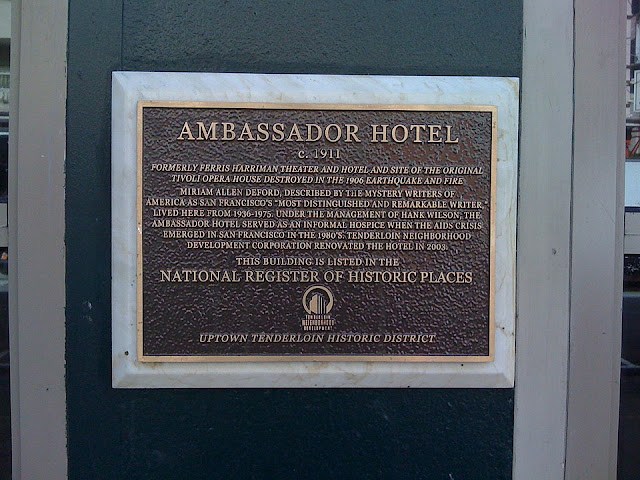 A plaque on the building with several problems including calling the building the "former Ferris Harriman Theatre" and saying that the earlier building on the site was the "original Tivoli Opera House," when it was actually version #3. It's a 2010 photo by Badmachine that appears with the Wikipedia article about the hotel.

The Wikipedia story has its own set of issues. Among other problems, they also list Hartman's name as Harriman and assert that the theatre was completed with the rest of the building in 1911. When did it cease being a theatre and get turned into a parking garage? Well, they think that was a 1929 event.  Such fun!

Looking south on Mason St. toward Market. On the left it's the Bristol Hotel, once the home of the Breakers Cafe and later the Black Cat. On the right is the Ambassador. Photo: Google Maps - 2019