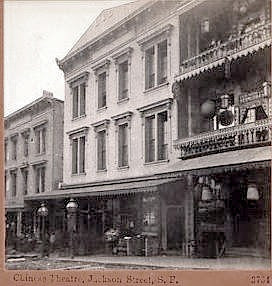 Opened: 1874. This facade photo labeled "Chinese Theatre, Jackson St, S.F." is by Carlton Watkins. The location was on the south side of Jackson St. just west of Kearny. It was across the street from the Old Chinese Theatre, also known as the Royal Chinese, at 626 Jackson.

Various newspaper articles refer to it as the New Chinese Theatre or the Sam Yup Theatre, after the name of the company performing there in its early days. Later it was called the Po Hing Theatre or Po Ring Theatre. It was also known as the Jackson Street Chinese Theatre.

The theatre building was nestled in the middle of a block. There was an entrance via steep stairs up from Jackson St. There was also a passageway from Washington Pl. (an alley now known as Cooper Alley) with the entrance to that being between 633 and 635 Jackson and heading south. It was a passage known as "Fish Alley." The Chinese called it "Tuck Wo Guy," after a store on it. It's now called Wentworth Place.

Lois Foster, in her unpublished 1943 manuscript "Chinese Theatres in America," discusses the opening on page 64, calling it the Sing Ping Yeun:

"In the spring of 1874, certain affiliates of the Sam Yup group in Chinatown at last challenged the dominance of the Royal Chinese Theatre [across the street at 626 Jackson] by erecting a rival house, the Sing Ping Yeun, which was thrown open to the public on June 20, 1874. The owners of the new theatre, said to have cost $50,000, were: Dr. Li-Po-Tai; Ah You, ex-Inspector of the Sam Yup Company; Ho Man, of the firm of Kum Wo; Ah Jarok, of the firm of Yee Tuck, and Ah Yung, agent for Dr. Li-Po-Tai. The elegant and superior members of this organization called themselves the Bo Fung Lin Company."

This mention is cited by Morgan G. Boyd in the "Theatre Rivalries" chapter beginning on page 67 of his his 2012 thesis "The Gold Mountain Theater Riots: A Social History of Chinese Theater Riots in San Francisco during the 1870s and 1880s." It's a PDF from San Jose State University's ScholarWorks. Thanks to Art Siegel for locating it.

This theatre and its rival across the street both figure in "Mongolian Theatricals: The Police Pounce Upon The Royal China Theater," an October 25, 1875 article in the Chronicle that was about theatres violating a 1 a.m. curfew.

On page 70 of his thesis, Boyd mentions an event in 1878 involving members of the Royal across the street protesting the New Theatre's practice of stealing performers by blocking its entrance. An October 19 Chronicle article titled "Almost a Celestial Riot" discussed tactics:

"These fellows were in the employ of the Royal Chinese Theater, and last evening they took up their positions in the doorway of the new Chinese Theater opposite, which opened a night or two since to the lovers of the Celestial drama and refused to allow any one entrance. A posse of policemen charged them with clubs, and they would scatter and return again to their positions. During the melee bricks and cobbles were freely used by the Mongols, and an incipient riot was only averted by the arrest of the thirty-three prime movers in this Mongolian project."

It's called the Jackson St. Chinese Theatre on the left in this detail from an 1885 map in the David Rumsey collection. The map was "prepared under the supervision of the Special Committee of the Board of Supervisors" that identifies certain properties as opium dens, gambling halls, etc. A high resolution image of the map is on the David Rumsey Map Collection website. 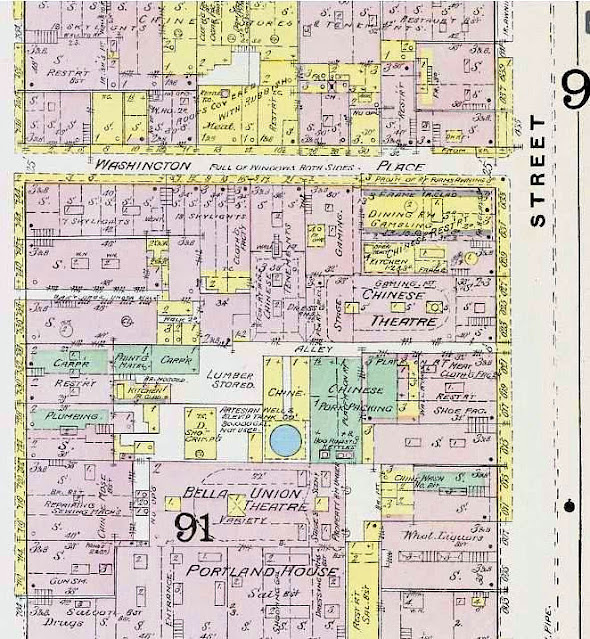 The "Chinese Theatre" is seen on the right a bit above center in this detail from an 1887 Sanborn map. That's Jackson St. on the right with the theatre entrance at 623. At the lower center note the Bella Union. Portsmouth Square is out of the frame to the left. Thanks to Art Siegel for locating the map on the Library of Congress website. He notes that the theatre again appears as active on an 1899 Sanborn map.

While earlier there had been many venues, by the 1890s the Chinese drama scene was reduced to just two theatres. This one on Jackson and the Grand Chinese on Washington St.  For a fine discussion of the production style and the theatres see "The Chinese Drama," an eight page article by Frederick J. Masters from an 1895 issue of "The Chautauquan." It's on Google Books. Masters refers to this house as the Po Hing and notes it had 500 or 600 seats and was running on alternate weeks.

Also of interest is an article by Arthur Inkersley from the May 1898 issue of Strand magazine. That piece, including Strand's mis-labeled photos, is reproduced as a 2011 post on the Digital History Project site.

Closing: The were evidently closed by 1905. The 1906 earthquake finished off the building. 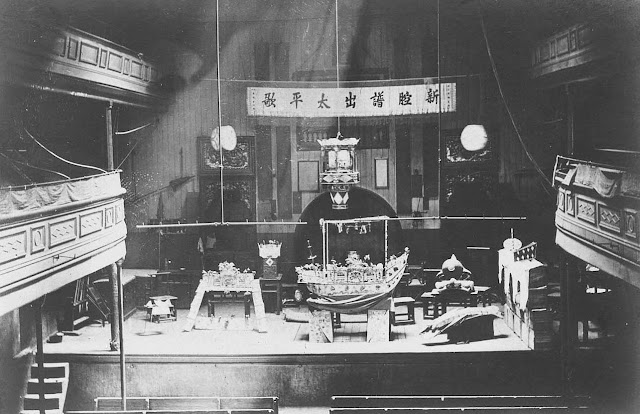 An undated stage view from the UC Bancroft Library appearing on Calisphere. The legend under the photo just said "Stage - Chinese Theater." 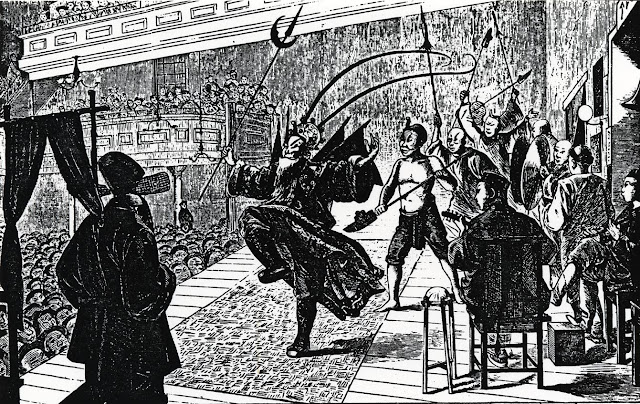 An 1878 drawing by Walter Yeager with the configuration of the balconies matching what's in the view above. It's on Calisphere from the Museum of Performance and Design Performing Arts Library. The illustration appeared in Leslie's Illustrated but they don't want to tell us that. Taking a bad cue from Leslie's, they mis-identify the venue as the Royal China Theatre. But that was a name used, at least by Westerners, for the Old Chinese Theatre theatre across the street. 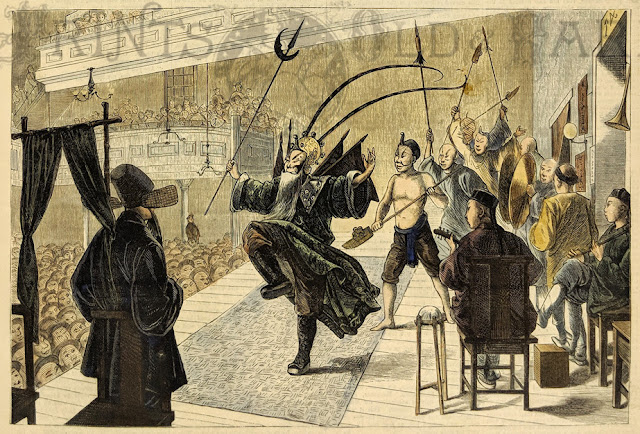 Another version of the illustration above. The image is one of two that appeared on page 421 of the August 24, 1878 issue of Leslie's Illustrated Newspaper where they get the theatre name wrong. Thanks to Art Siegel for locating these on the site Prints Old & Rare. The caption: "Interior of the Royal China Theatre during a performance. California - An evening in the Chinese quarter of San Francisco...from sketches by H. Ogden and Walter Yeager." 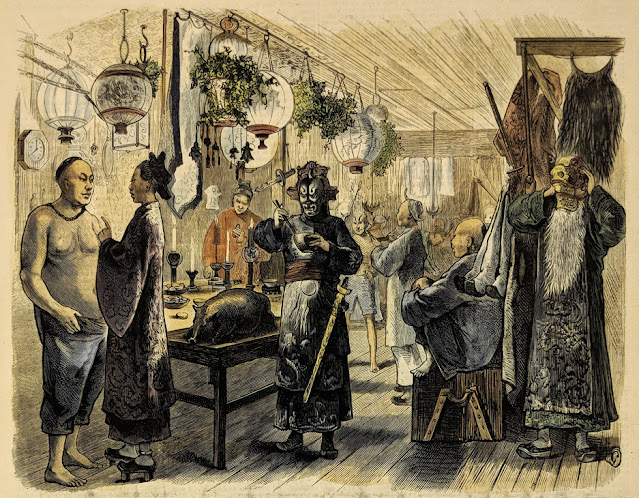 The second of the illustrations from the August 24, 1878 issue of Leslie's. Their caption: "The all-night supper spread in the dressing room of the Royal China Theatre." 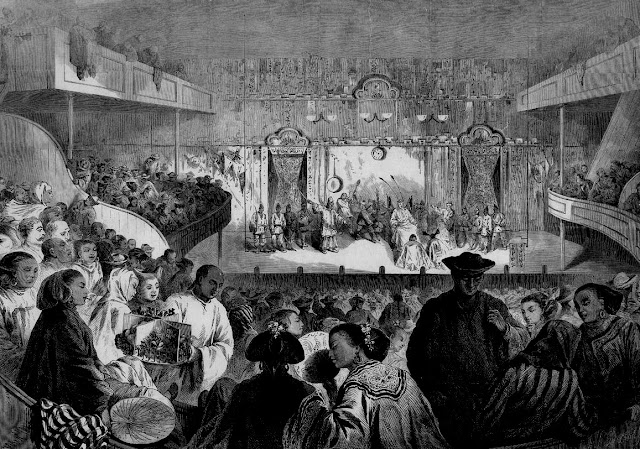 "'The Coming Man.' Scene in the Principal Chinese Theatre, San Francisco, California, during the performance of a great historical play." It's another illustration from Leslie's that's on Calisphere from the UC Berkeley Bancroft Library. They don't give us a date but credit Joseph Becker as the artist, Davis & Speer as the engravers and Frank Leslie (1821-1880) as the publisher. Becker nailed the balconies but took a few liberties with the architecture onstage. Thanks to Arthur Dong for finding this on Calisphere.
Arthur Dong is the author of the books "Hollywood Chinese: the Chinese in American Feature Films" and "Forbidden City U.S.A: Chinatown Nightclubs 1936-1970," which cover theatres, performance spaces, and entertainers in San Francisco Chinatown’s past. He also directed the related documentaries "Hollywood Chinese" and "Forbidden City, USA.," available on Amazon. 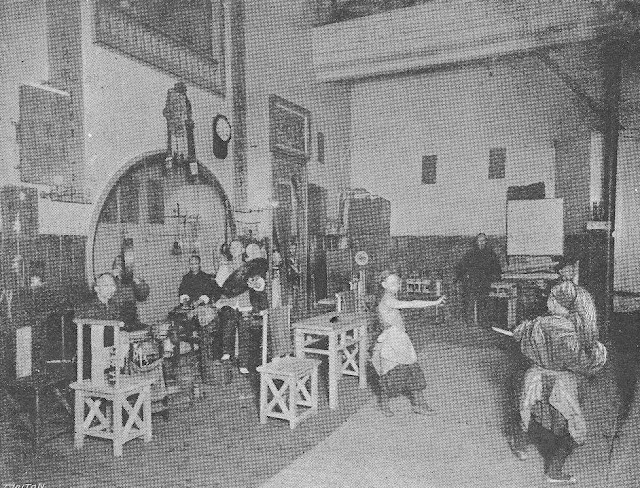 A photo from an 1898 Strand magazine article that's reproduced on "Chinese Theatre, Chinatown..," a 2011 post of the Digital History Project. The magazine credited the photo to the Pacific Illustrating Bureau and mis-identified it as the "Stage of the Washington Street Theatre." Note the view of the second balcony at the top of the image. If we were at the Grand Chinese on Washington there would be a "V.I.P. box" on the level below that. 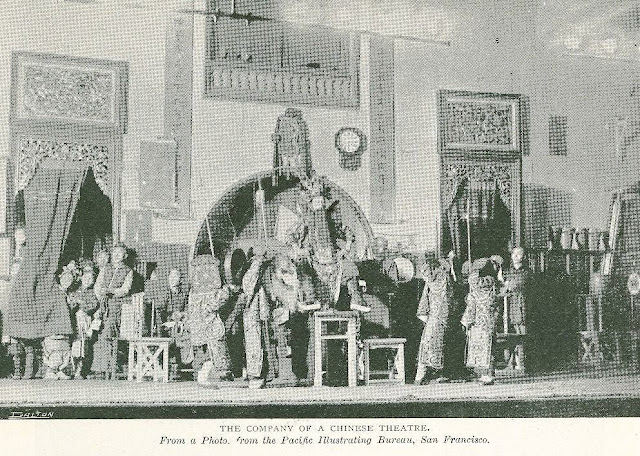 Another photo from the 1898 Strand magazine article. 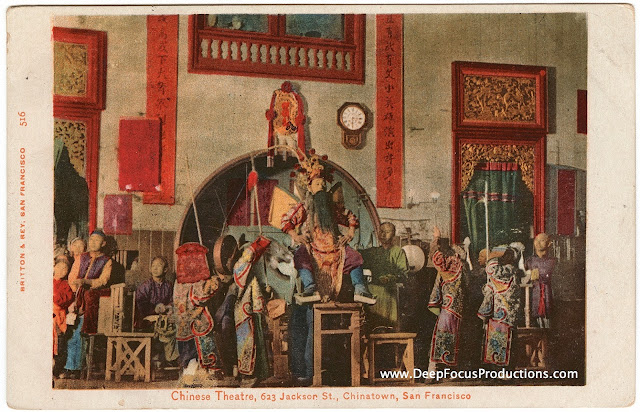 Even better, the Strand image above appears as a colorized postcard from the Britton & Rey Lithographers. Thanks to Arthur Dong for sharing this copy from his collection. Note the theatre's address at the bottom of the card. Art Siegel found another copy of the card on Card Cow. 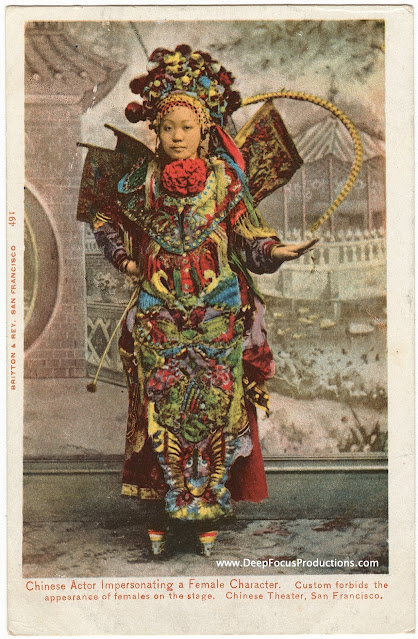 Another Britton & Rey card. Thanks to Arthur Dong for sharing this copy from his collection. Note that this copy says "Chinese Theatre, San Francisco" but gives no address. Art Siegel located a copy of a slightly different version in the Cornell University collection with a July 1906 postmark that says "Chinese actor impersonating a female character, Chinese Theatre, 623 Jackson Street, San Francisco." 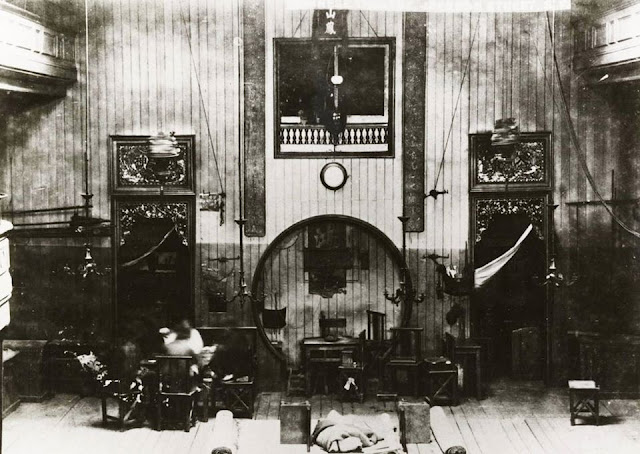 This stage view is on Calisphere from the Museum of Performance and Design Performing Arts Library. They identify it as from 1880s taken at the Royal China on Jackson St. The street is right but not that Royal China name. That one was across the street. And as far as the Chinese name, they also mis-identify it as being the Donn Quai Yuen, the theatre on Washington St. that was also known as the Grand Chinese. 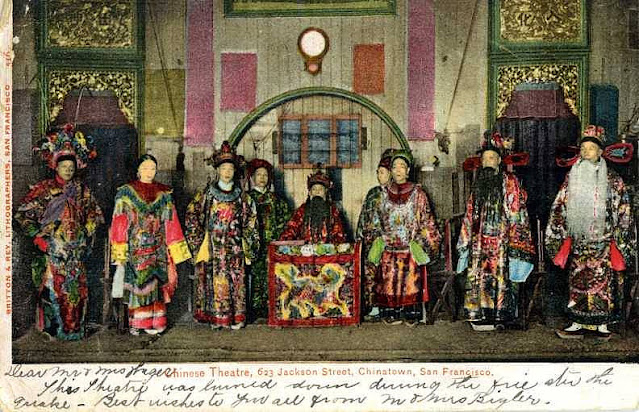 A card postmarked July 15, 1907 with the note on it that the theatre "burned down during the fire after the quake." Thanks to Cezar Del Valle for sharing the card from his collection as a post on Facebook. Note that the card has the address: 623 Jackson St.
A last map: 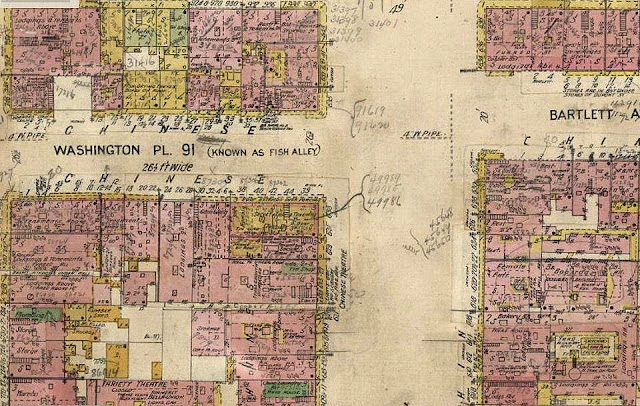 Although it still says "Chinese Theatre" in the street in front of this 1905 Sanborn map, the theatre was unused by this time. Thanks to Art Siegel for locating the map.

"Stage & Audit'm Dismantled." It's a detail from the 1905 Sanborn map. Thanks again to Art Siegel.

More information: See the timeline for pre-1906 Chinatown theatres down at the bottom of the page for the Grand Chinese. There are also several interior views from unidentified theatres. Other pre-1906 venues: Old Chinese / Hung Chien Guen / Royal, across the street at 626 Jackson | Royal Chinese, 836 Washington |