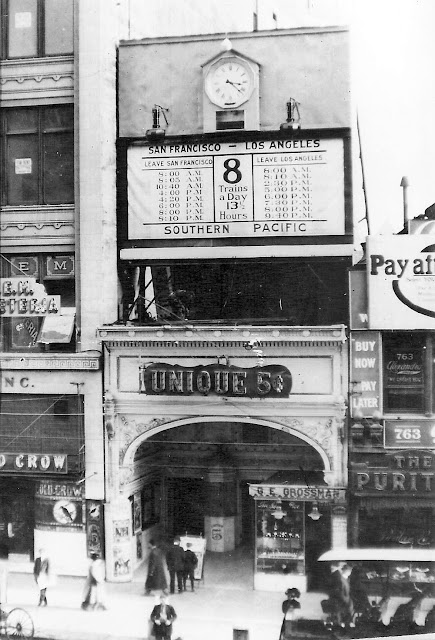 Opened: 1909. The Unique Theatre was on the south side of the street between 3rd and 4th, opposite Grant Ave. It was a busy block for theatres with others there including the Silver Palace (later called the Hub), Odeon, Wonderland, Portola and Pastime. The latter was demolished in 1916 to make way for the California Theatre.

The 1909 photo is from the Jack Tillmany collection. A smaller version is on the San Francisco Public Library website. Jack notes that the first telephone directory listing for the Unique was February 1909 and the first city directory listing was September 1909.

The July 15, 1916, issue of The Moving Picture World mentions the Unique:

"Probably the second house to be opened on Market street [after the fire] was the Gold Palace of I. H. Lichtenstein, about opposite Sixth street. This, however, did not prove to be a success. Then came the Unique theater on Market opposite Grant avenue. This house occupied the entire building in which it was located and was the first one that was not merely a converted store. It is still conducted by the same company that originally built it, in conjunction with the Odeon theater a few doors below, under the direct management of Joe Huff. Both of these places have been kept thoroughly abreast of the times in the matter of equipment and furnishings and a little over a year ago changed from a five-cent to a ten-cent policy. Paramount pictures are now being shown, together with Chaplins, of which a feature are made. These houses have a combined seating capacity of about 700."

Nope, can't go on the weekends, but we have a pass from Max L. Shirpser that's otherwise good for a show. The date? Who knows? Thanks to Kevin Walsh for the post on the BAHT Facebook page.

Closing: The theatre closed around 1934. It's in that directory with Ruban Jacobs listed as manager. There's no listing in the 1935 directory. The site is now part of the Four Seasons Hotel. 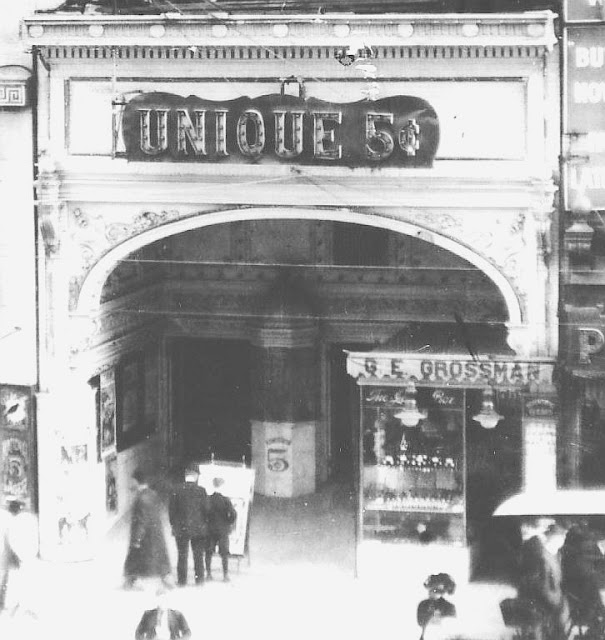 A detail from the 1909 photo at the top of the page. This one appears on page 45 of Jack Tillmany's Arcadia publishing epic "Theatres of San Francisco." The page is included in the preview on Google Books. This photo also appears with an article on the site SF City Guides about theatres operated by the Grauman family where they make the mistake of thinking this is their pre-1906 Unique Theatre. 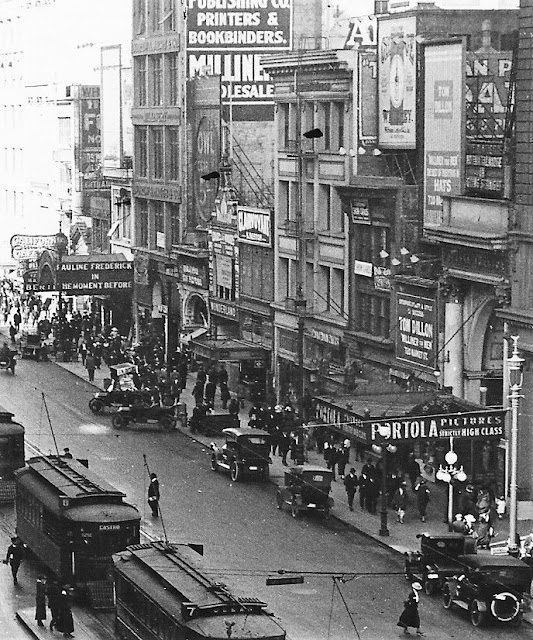 A summer 1916 photo looking east from the Jack Tillmany collection. The Odeon, at the far left, is running "The Moment Before" an April release with Pauline Frederick. The Unique is two doors this side of the Odeon, the building with the light colored arch. The big "Owl Cigars" sign on top has replaced the earlier Southern Pacific signage. Just this side of the Unique is the Wonderland at 763 Market. The Portola  at the far right was at 779 Market. 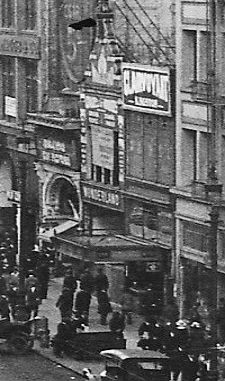 A detail of the Unique Theatre and Wonderland from the 1916 photo. 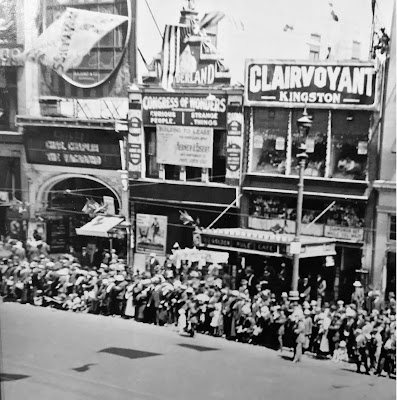 At the center of this 1916 photo is Wonderland at 763 Market St. advertising its "Congress of Wonders - Curious People - Strange Things." Thanks to Glenn Koch for sharing this parade photo from his collection. The Unique, at the left, was running Chaplin's "The Vagabond," a July 1916 release. 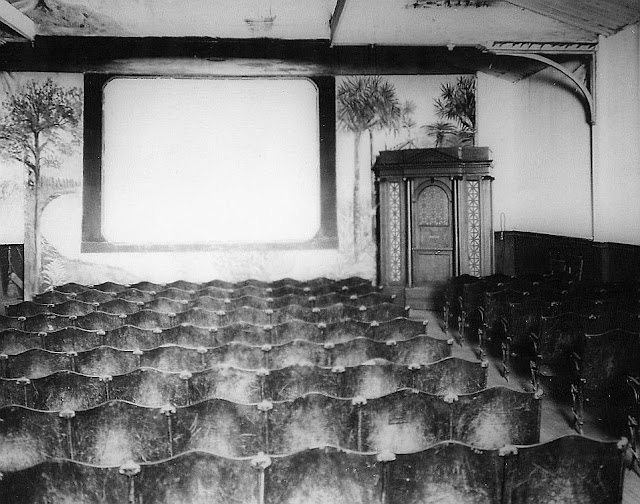 An interior view from the Jack Tillmany collection. Or maybe not. It's unverified and Jack notes that it's just as likely we're looking at the Unique Theatre at 1217 Market St. in Philadelphia.

Not so Unique: This Unique Theatre shouldn't be confused with the pre-earthquake Grauman's Unique on the north side of the street between Mason and Taylor. And there was another Unique at 2117 Market St. It was on a 1909 list of 25 unsafe nickelodeons that fire Chief Shaugnessey wanted either closed or remodeled.

See the Cinema Treasures page on the Unique, which also has comments on the pre-1906 Unique.

Head to the Market St. Theatres album on the BAHT Facebook page for several hundred photos of other theatres on the street.