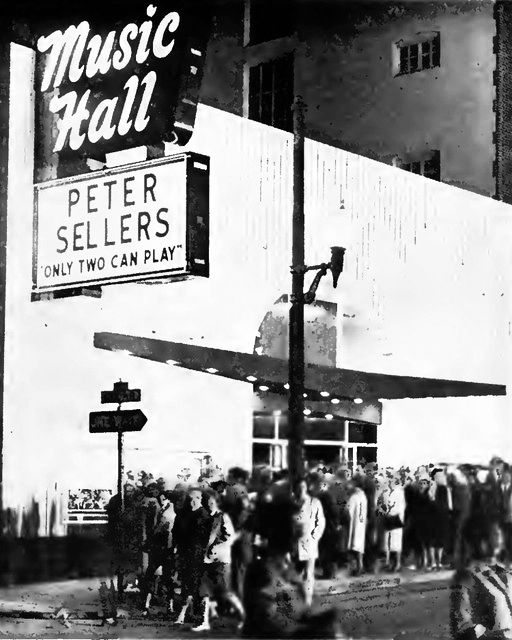 Opened: April 19, 1962 with Peter Sellers in "Only Two Can Play." The building is on the west side of the street at Cedar St., one short block north of Geary. Herb Rosener's Fine Arts Theatre Corporation opened the theatre in response to a glut of profitable foreign and other art house product that his nearby Larkin Theatre couldn't handle. Thanks to Jack Tillmany for the opening night trade magazine photo.

Cinema Treasures contributor Joe Vogel comments: "Rosener was for many years one of the leading exhibitors and distributors of foreign films in the U.S. He operated at least a dozen art houses in major west coast cities, as well as in Salt Lake City, Kansas City, and Cleveland."

An April 19, 1962 ad. Thanks to Mike Rivest for posting it on the Cinema Treasures page about the Music Hall.

Later Rosener went into partnership with New York's Walter Reade circuit. The Reade-Rosener operation also had the Clay, Bridge and Stage Door theatres. Long runs at the Music Hall included "Charly," "Easy Rider," "Chinatown" and many more. It closed in 1978 with the Walter Reade bankruptcy. Mitchell Bros. grabbed this one and the Larkin and tried for a short period to turn the Music Hall into a live performance venue.

The floor was leveled and the venue had a period as a gay disco and legit theatrical venue, still called the Music Hall, under the ownership of Margaret Ann McGuire and Ann Marie Garvin. In 1987 Frank Lee, who had been running the Kokusai Theatre on Post St., gave the Music Hall another chapter as a film house, running mostly Chinese and Japanese releases.

"The operators of Japantown's popular filmhouse, the Kokusai, are embarking on a big new venture as it moves to the Music Hall Theater on Larkin Street and reopens as the first movie theater in San Francisco to offer the services of a full bar - wine, beer and mixed drinks. 'It's a very exciting prospect,' said Frank Lee, 32, of San Francisco, who will begin showing movies at the Music Hall, 931 Larkin Street. The Music Hall was one of San Francisco's most popular art film theaters in the '50s and '60s. Although there are a few theaters in the country that serve beer - there's one in Savannah, Ga., for example, and another has been proposed for Dallas - there apparently aren't any that offer a full line of cocktails. Lee said his operations at the Music Hall, originally scheduled to begin today but postponed due to construction delays until Friday, July 24, will include regular movie theater snack bar fare such as candy and popcorn. In the near future, he said, he may offer light meals, since the Music Hall also has a full kitchen.

"Lee said the Kokusai, which has specialized in Japanese movies, was forced to vacate its 280-seat house at 1700 Post Street because the building's owner, Harold Iwamasa, plans to open a fast-food franchise restaurant there, possibly a Denny's. Iwamasa ran the Kokusai for a period of years. Both he and Lee aimed at a balance of Asian action films and more high-minded Japanese fare. The theater was generally considered a success. Although it has been widely speculated that the Kokusai was forced to close because of competition from the neighboring Kabuki 8 theater complex operated by American-Multi Cinema of Kansas City, Lee said the big multiplex operation had no effect on his decision to move to the Music Hall. 'Their programming was totally different,' he said. He allowed, though, that a decision to put a fast-food restaurant in the neighborhood may have been prompted by the arrival last year of the Kabuki 8. Nearby fast food stores on Fillmore Street reportedly have been doing brisk business.

"At the new location, Lee said he plans to continue the Kokusai's programming policies, although the theater's name, at least for the time being, will remain the Music Hall. Sunday through Thursday the theater will offer a variety of movies - mostly Japanese and Chinese, but also recent American releases - from noon until midnight. On Fridays and Saturdays, the films will be shown until 10 p.m., and then the Music Hall will offer 'disco events' with live music. This weekend, for example, the Paul Collins Beat will perform. Lee said drink prices will range from $1.75 for domestic beers to $2.50 for call drinks during films. The seating for the movies will be in director's-style chairs, made in three different heights and arranged in banks to afford the audience maximal views of the 20-by-28 foot screen. Patrons of the bar will be allowed to sit at tables along the walls of the theater, in the fashion of a nightclub. The Music Hall most recently had specialized in theatrical productions, from the long-running 'Dance Between the Lines' dinner show to 'Rapmaster Ronnie.'

"The theater, originally a department store and converted to a moviehouse in the late '40s and to a disco in the late '70s, is owned by Margaret Ann McGuire and Ann Marie Garvin, who created 'Dance Between the Lines,' a successful jazz dance show that employed young talents who performed in a revue format and also waited tables. The transformation of the theater into a rock nightclub and now a moviehouse has been a 'slow evolution,' said co-owner McGuire. 'If it all works out, it will be a wonderful asset in a neighborhood that is trying very hard to upgrade itself.' Lee is the son of Frank Lee, of San Francisco, who once was among the most influential distributors of Asian movies in the United States."

Thanks to Jack Tillmany for locating the article. Frank Lee and his wife, doing business as Lee Family Theatres, operate the Marina, Presidio and 4-Star theatres.

Status: It's unknown how long the final fling as a film house lasted. The building is now used as the Chinese Grace Church. 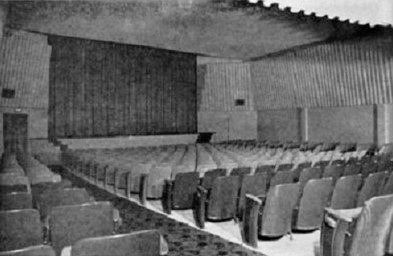 A trade magazine view of the front of the auditorium that appeared with this caption: "the auditorium of the Music Hall is finished in pastel shades -- cheerful, relaxing, modern. Treatment is simple. No wall decorations or draperies other than the stage curtain. 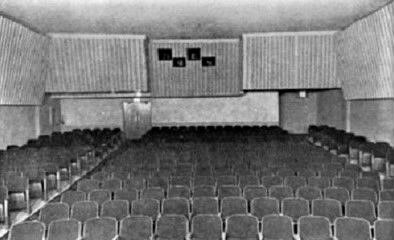 The trade magazine photo of the rear of the house. Thanks to Cinema Treasures contributor Elmorovivo for posting these two photos on the site's page about the Music Hall. The caption:

"The side and rear wall acoustical material was installed to resemble a miniature of the United Nations assembly room. The material, alternating in two to three inch thicknesses, slopes slightly inward at the top to form a cove for lighting. The vertical stripes are both decorative and functional, as, combined with a low ceiling, 95 per cent of all low-cycle bass notes is absorbed." 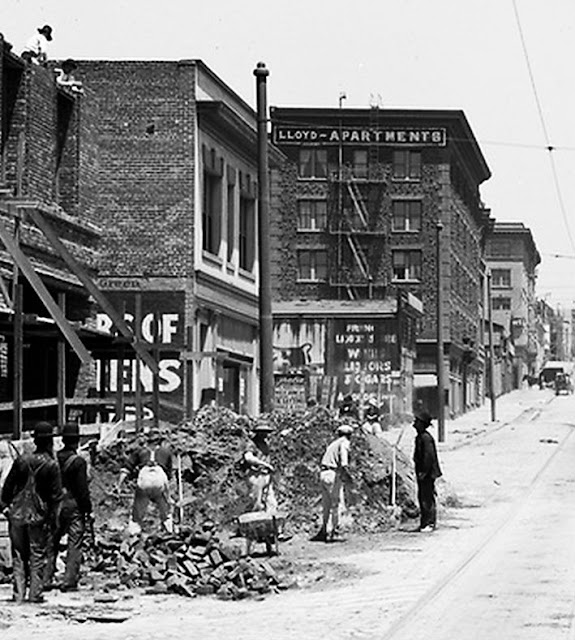 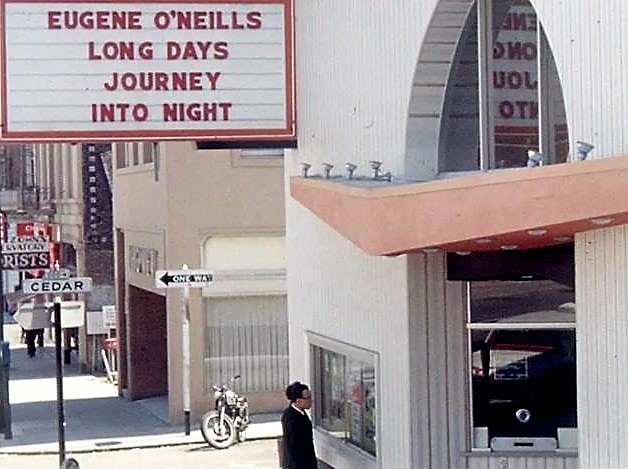 This 1962 image was a post from Bob Ristelhueber on the BAHT Facebook page. The shot is from some footage in the Prelinger Archives. Bob also has a post of 2 1/2 minutes of the footage showing other theatre exteriors as well. 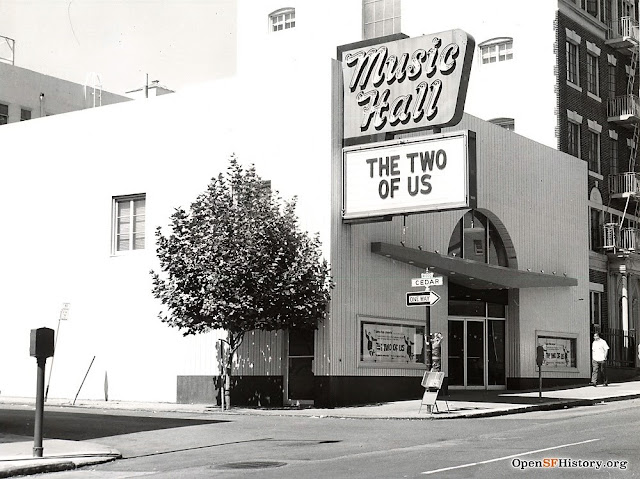 An August 1968 photo by Tom Gray from the Jack Tillmany collection that appears on the Open SF History Project website. 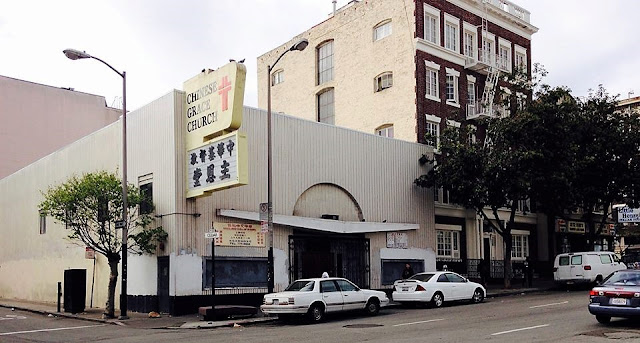 A 2015 photo of the theatre by William David French Jr. that appeared as a post on the BAHT Facebook page.