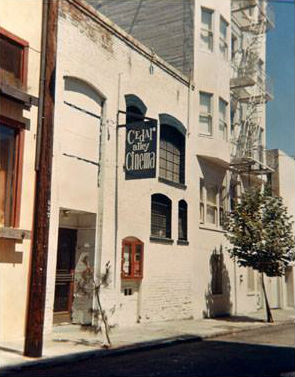 Opened:  August 20, 1965 as the Cedar Alley Cinema offering foreign films, revival programming and espresso. The initial film was Fellini's "8 1/2." Cedar St. is just north of Geary and narrow enough to be an alley. The building dates from 1919 and prior to its cinema conversion by Hans Hammann and his brother Detlef was a grocery store with the entrance at 1031 Post St. The photo from the Jack Tillmany collection appears on the San Francisco Public Library website.

The theatre's location between Larkin & Polk put it in close proximity to the quite successful Larkin and Music Hall theatres.  Patrick Carroll comments: "There was something of an arts district on Larkin between Geary and O'Farrell. Three theaters and two bookstores: the International Bookstore and Fantasy, Etc. There were good restaurants and cafes too; a good bakery on Geary and a nice pizza restaurant. All gone."

The name was changed to Cento Cedar in 1967, allegedly for legal reasons. Starting in 1972 the Hammanns leased the theatre to Marge and John Buckley. In 1983 the Buckleys closed the theatre and moved their operation to the Rio Theatre on Union St., which they renamed the Mercury.

The Cento Cedar was renamed the New Cedar Cinema and inexperienced operators tried to make a go of it without much success.

Status: The building is now an architect's office with the entrance back on Post St. The booth is now the room for the archives of the firm. 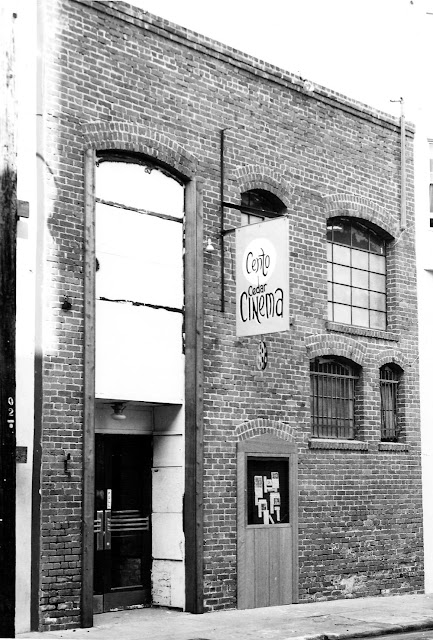 A 1968 photo by Tom Gray that's in the Jack Tillmany collection. 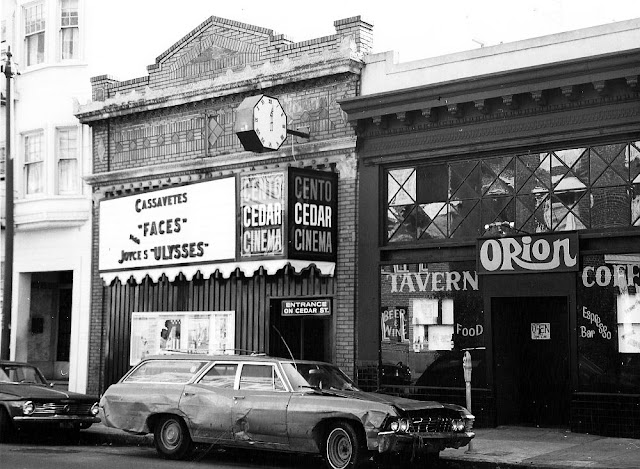 The Post St. end of the building in November 1969. It's a Tom Gray photo from the Jack Tillmany collection. Jack comments:

"Because of its hard-to-find location, in 1969 John Buckley thought it would be worth a try to promote its existence on the heavily trafficked Post St. side, which was actually the screen end of the auditorium, and installed a more traditional facade and marquee. He angled the marquee to face the heavy Westbound traffic on Post, a one way street, which seemed like a good idea at the time.

"Much to John's frustration, the City of San Francisco chose to reverse the direction of traffic on Post to Eastbound so as a result the marquee now faced the wrong way. Next door, the Orion was a typical and popular beer/wine/espresso coffee house of the era. That stylishly appointed station wagon says it all about driving in SF in the 1960s." 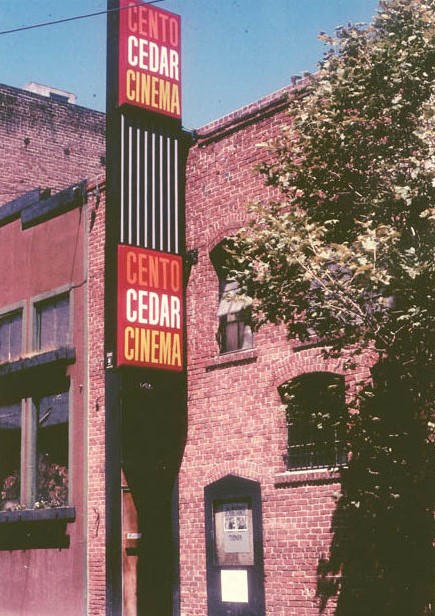 This 1975 look at the Cento Cedar from the Jack Tillmany collection appears on the Cinema Tour page about the theatre. 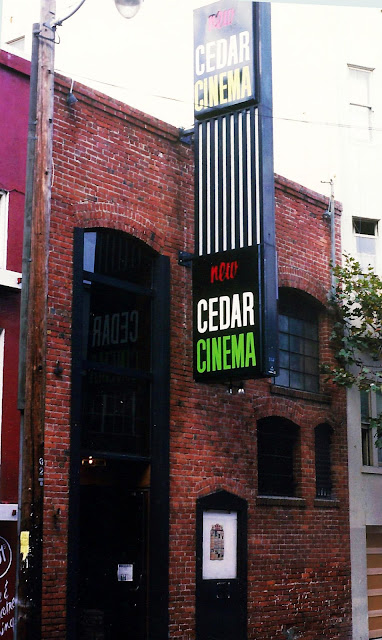 A 1983 photo by Tom Gray from the Jack Tillmany collection. Note the name change to New Cedar Cinema. 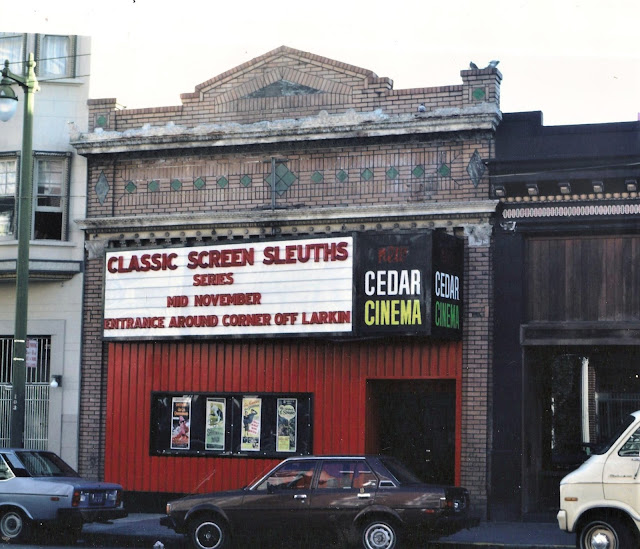 The Post St. facade in 1983. It's a Tom Gray photo from the Jack Tillmany collection. 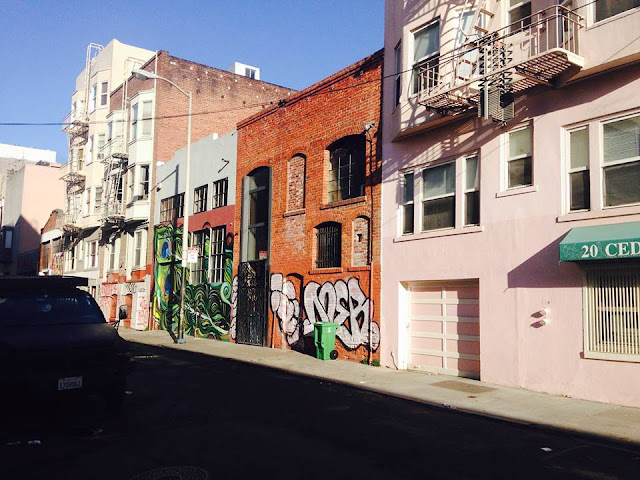 A 2015 look at the Cedar St. side of the building that had been the theatre's entrance. Thanks to William David French Jr. for his photo, a post on the BAHT Facebook page. 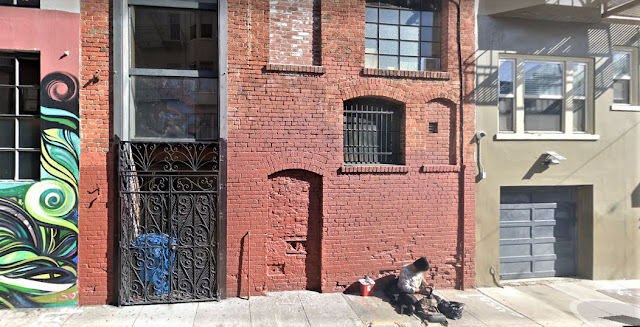 The building in 2019. Photo: Google Maps

See the Cinema Treasures page on the Cento Cedar for a number of stories from those who frequented it and claim to have worked there. Several remember rear projection which, according to Jack Tillmany, was not the case. In a comment on the page, Loingirl says:

"Former theater-goers and curious old-timers of the Tenderloin cinematic haunts would be glad to know that although the old Cento Theater is gone, the building has remained in the loving care of an architecture firm (not a home) during the last 20-plus years since being acquired in 1988. Although little of the original theater remains, interior renovations have transformed the artsy theater to a tasteful design studio. The owner maintains nostalgia for the building, respecting its humble, gloried historical past. It is an edifice where many ghosts and memories continue to linger within its quaint, but seismically improved, brick walls. It was not by accident that he chose to keep the remnants of the old projection room in the mezzanine above fairly intact, complete with the projection squares. I should know since I used to be an employee here for over 15 years now and used to peer out the project squares when relegated to organizing the archives in the former projection room.

"While I don’t think I was born when this place was a theater, I have heard many stories. The door to this projection room is the only original remnant of a bygone era. Those who worked at the Cento Theatre’s projection room would be glad to know that the words “Home of the 50 second splice” still remain scrawled on that very door to the former projection room. There remain some memories too special to expunge. Sadly, the popcorn concession did not survive the renovations, but the original bathroom locations remain, but have been transformed to be more modern and comfortable. The entrance has been relocated from the more modest, but still gritty Cedar Alley to the livelier and more colorful 1031 Post Street."